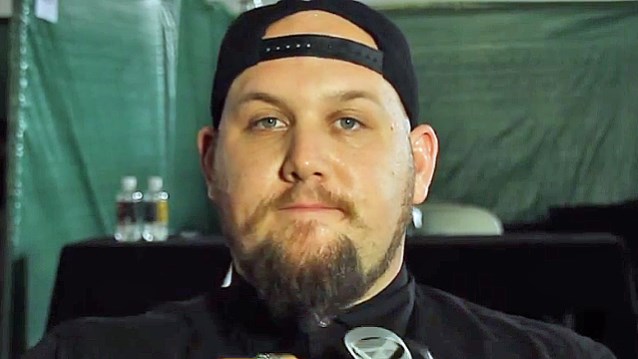 Brandon Saller, drummer and clean vocalist for reactivated Southern California metallers ATREYU, was interviewed by Australia's Music Feeds during this year's Soundwave festival. You can now watch the chat below. A couple of excerpts follow (transcribed by BLABBERMOUTH.NET).

On whether ATREYU is approaching its upcoming comeback album as if they were a brand new band:

"I feel like we have too much of a history to not embrace the fact that we have been around, which we're very lucky for. But I feel like we're coming back with just the… There's no real agenda other than make music we love and have fun. We just don't want it to be… Music had turned into such a business and such a daily grind… These shows we've played so far, since we've been back, feel like they did when we were 17 years old; it feels like that again, which is I believed how it should be. So we're just kind of embracing that whole feeling, and, like I said before, just doing things that are fun. And so far it's been great."

On the progress of the recording sessions for ATREYU's upcoming album:

"We just finished tracking the record, for the most part, four days before we left for [the Soundwave festival]. So it's essentially done. We still have to mix and do all that crap. But I think the new record should be out, like, September/October. So I'm sure throughout the summer there'll be other tidbits and new singles and stuff like that. But, yeah, we're stoked. It came out great. We're very much just shooting from the hip with this record, and whatever came out first is what we did. [Vocalist] Alex [Varkatzas] is fucking as brutal as ever. And it's fun. It's a very fun, cool record."

On frontman Alex Varkatzas's decision to do away with clean singing on ATREYU's upcoming album:

"Here's the thing. When we started the band, we were a hardcore band, and we wanted to progress and do… We always wanted to do bigger, better, bigger, better, bigger, better… every [album we released] at the time. And when we did [2007's] 'Lead Sails Paper Anchor', it was, like, 'What's our next step?' We've gotten as big as a hardcore band can get, I think. What's the next step? So we were, like, 'Cool. Let's fucking do whatever the fuck we want. So we wrote a bunch of rock songs. A lot of heavy songs, a lot of rock songs… It was just an expansion of Alex wanting to do something different, and us wanting to do something different. We did 'Lead Sails', and it was a fucking really great record, and it sold a lot of records and it opened our band up to radio, opened our band up to tour with a lot of different bands we never would have before, and it was fun for us. But I think everyone loves their comfort zone and everyone just loves what they do, and it was kind of, like, 'It was rad to write this record and it was cool to tour it,' and whatever, but 'I just wanna get there and fucking be pissed and go fucking apeshit.' And we love that about him too. So I think going away for a while and not being in this band and coming back and being able to think about what you love most about the band… I mean, those were conversations that we had… Like, what do we love most? What's out strong suit? What do we feel most comfortable doing? 'Cause that's what we wanna do, 'cause that's the most fun. So I think, for him, he was, like, 'I just wanna fucking come out and rip people's heads off.' So it was, like, 'All right. Cool. You don't wanna sing? You don't sing. That's how we started. I'll sing. And you just fucking go nuts.' And everyone's stoked on it. And he's doing different shit. He's doing a lot of different stuff on the new record — different shit he's never done before. But it's brutal. It's fucking awesome."

ATREYU's new CD will be released through the Search And Destroy imprint as part of the newly announced joint venture between Raw Power Management and Spinefarm.