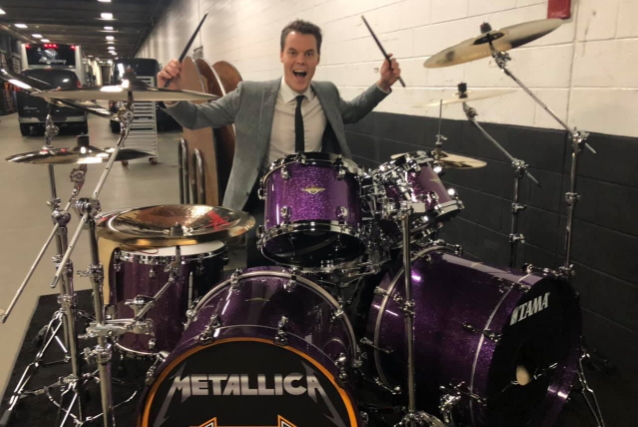 Boston Bruins goalie Tuukka Rask was presented with an exact replica of METALLICA drummer Lars Ulrich's drum kit during a pregame ceremony commemorating his 500th career game. The ceremony — which was held Thursday night before the Boston Bruins' matchup with the Pittsburgh Penguins — featured a video with Rask highlights and well wishes from former teammates as well as former Bruins stars and current team executives. Also featured in the clip was Ulrich, of whom Rask, himself a drummer, is a huge fan. The Bruins presented Rask with the kit, as well as a silver stick, a watch and a bottle of wine.

Earlier today, Ulrich's drum tech Jimmy Clark took to his Facebook page to share a few photos of the drum-set presentation and included the following message: "So last night I got to meet Boston Bruins goalie Tuukka Rask and present him with a Lars replica drum set that his teammates bough for him as a gift for his 500th game played. Thanks to Tuukka/Keith Robinson and the Bruins for a magical night!"

Tuukka's love for METALLICA has been well documented. His goalie mask has featured his name in METALLICA's signature font, and he has said that he loves to play drums along to the band's music.

Back in May 2017, Tuukka was photographed rocking out in the crowd at METALLICA's concert at the Gillette Stadium in Boston.

So last night I got to meet Boston Bruins goalie Tuukka Rask and present him with a Lars replica drum set that his...

Some former teammates – and one very special surprise guest – wanted to offer up their congratulations to @tuukkarask for his 500th NHL game.#Tuukka500 | #NHLBruins pic.twitter.com/M86AOn2EvU