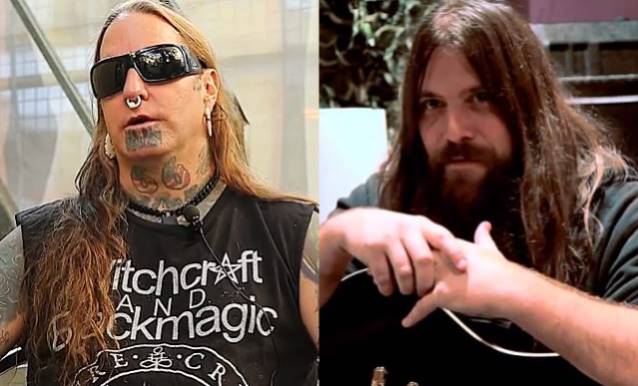 "Secrets", a brand new song from BORN OF THE STORM — the collaborative project featuring DEVILDRIVER vocalist Dez Fafara and LAMB OF GOD guitarist Mark Morton — is available for free download at this location. Threee previously released tracks — "The New Rain Blues", "Nowhere Fast" and "Dust" — can be streamed below.

According to Morton, Kevin Talley (SIX FEET UNDER, DAATH, MISERY INDEX, CHIMAIRA) played drums on the demos, with Morton handling the bass on "Dust".

Writing on his Twitter profile, Fafara previously compared the music to CIRCUS OF POWER meets "Badmotorfinger"-era SOUNDGARDEN while Morton cited Chicago doom legends TROUBLE as an influence on the material.

In an interview with The Metal Review, Dez stated about BORN OF THE STORM's inception, "It started about three years ago with Mark and it was more inspired by bands that aren't metal; we have 12 completed tracks now, but it's taken so long because we were just so busy with everything else."

He added, "I think my favourite part about BORN OF THE STORM is the fact that the music is so different from anything else we've made. We didn't think we were going to release it; but now look at it."

"With DEVILDRIVER, we can't call it an influenced genre, because we don't really sound like other bands, especially after five records, because our sound is different every time and BORN OF THE STORM is so unique is style as well; because of the different musical genres we've incorporated into the music. It definitely gives it a unique feel, and I'd say that it feels like that because we're not just pulling influence from one genre, we're utilizing a spectrum of genres as musical inspirations."

When asked about his "clean" singing approach in BORN OF THE STORM, Dez said, "I like it all. The clean style is something I like to get out more; people need to know I can do both… It's hard to sing your lungs out into a microphone, and it's also hard to scream your lungs out into a mic; I really just wanted to show off my vocal capability and kind of prove to myself and everyone else that it's possible to do both."