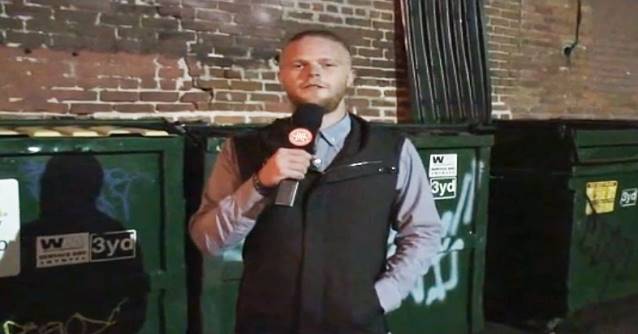 Groovey of Groovey.TV conducted an interview with guitarist Lee Mckinney of the Chicago-based progressive metal hybrid BORN OF OSIRIS on November 2 in Denver, Colorado. You can now watch the chat below.

BORN OF OSIRIS released its third full-length album, "Tomorrow We Die Alive", on August 20 via Sumerian Records. The CD was recorded with producer Nick Sampson (I AM ABOMINATION, IN FEAR AND FAITH, ADESTRIA). Mixing the CD was Joey Sturgis, who has previously worked with ASKING ALEXANDRIA and EMMURE, among others.

In a recent interview with Metal Mouth, Mckinney stated about the "Tomorrow We Die Alive" title: "It means no matter what happens tomorrow, make the most out of every day and every moment. If things were to end tomorrow, go out feeling alive and fulfilled.

He added: "[There is no overall concept to the album] but the lyrics are a lot more personal on this record. With the last one, they were talking about more futuristic/spiritual concepts. This one, they are talking about things that pertain to us and the everyday lives and things we go through."

Mckinney also spoke about how BORN OF OSIRIS' writing process has changed since the departure of guitarist Jason Richardson.

"It really hasn't changed, and for that reason we are staying a five-piece for a while," he said. "Cameron Losch and I from the beginning have wrote the base skeletons of the songs, that goes for every song except one off of 'The Discovery'. We get very tired of hearing people credit a certain records sound or vibe to whoever guitar player is in the band at the time. It's not like that, never has been. It's been Cameron and I recording the guitars on every record from the start. And for 'Tomorrow We Die Alive', I recorded most of it completely alone in my studio."