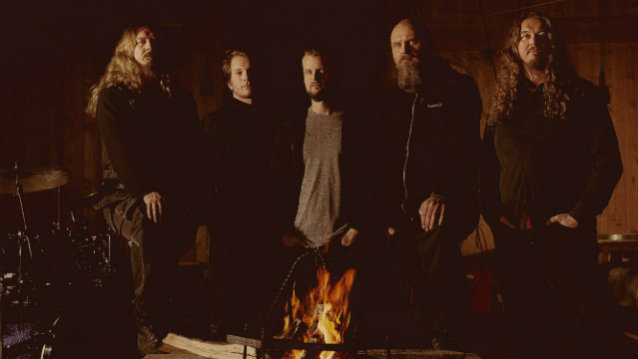 Jasmin St. Claire conducted an interview with guitarists Jens F. Ryland and Øystein G. Brun of Norwegian epic black metal pioneers BORKNAGAR at this year's edition of the Inferno festival, which was held April 12-15 in Oslo, Norway. You can watch the full chat below. A few excerpts follow (transcribed by BLABBERMOUTH.NET).

On the band's recent live dates in South America:

Øystein: "It's a lot of passion. A lot of love, a lot of intensity. Everything, basically. Amazing. The response from the audience was overwhelming a lot of the times, so to speak."

On the lyrical themes found on the band's 2016 "Winter Thrice" album:

Øystein: "I don't want to be a traffic sign telling a simple story. To me, it's a little more philosophical, different layers and stuff. 'Winter Thrice' is referring to Norwegian mythology and Fimbulwinter in Northern mythology, warning signs from nature that the world is about to fall apart, so to speak. It's kinda philosophical. Again, we always focus on this life and death, the circle of life, all those things, in a philosophical way. On 'Winter Thrice', we had a different approach than previous albums. We used nature as a scenery for the whole lyrical expression."

Øystein: "I was actually scrolling back on some old photos from back in the days when we first met up to do the first records. The old pictures, there was always a date imprinted on the photo and I noticed it was exactly 20 years since we met for the first time to do the first album. I just sent him a text message, 'Hey, maybe we should do something. It's been 20 years since we first met and this is the tenth album.' The stars aligned for doing something special. We talked on the phone and yeah, he was really positive about the whole thing. We did it. It turned out great; it was fantastic to be able to work with him again. I love his work in ULVER, I'm a big fan of the band. His contributions on the album was really…made it special in a way. It was really cool."

On why BORKNAGAR is playing more live dates recently:

Jens: "We had the possibilities, so we're grabbing it with [stand-in vocalist] Pål ['Athera' Mathiesen] being part of the live team. We can agree to more gigs, so we're trying to [play more dates]."

On the band's future live plans:

Jens: "We've been flirting with a North American idea. A few festivals this summer and then we'll see what happens. There is progress with the new album, so let's see how much time we have."

On whether BORKNAGAR has a title for their next studio album:

Øystein: "No, it's way too early for that. Yeah, I've started to write some new music. I have a really good feeling about this stuff. It will probably be my main focus for the next year, I guess, to write new music and get the machinery going. Of course, make the best album we've ever done."

On the growth of the Inferno festival:

Jens: "It keeps maturing. I was thinking about that earlier today when we had some requests for TV interviews and I remember back 17 years or what it is, the first TV interviews I did here was pure… bullshit. When there is a TV reporter coming up to me and asking me if I'm going to church on Saturday, what does that have to do with music? It's calmed a bit since then. Other than that, it's the same people, not the same bands, but the same scene and everything has been matured, calmed down."