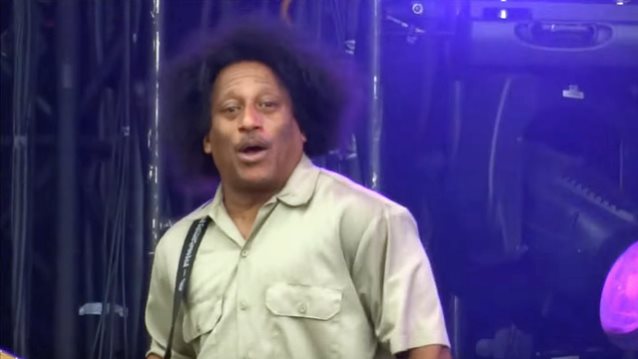 BODY COUNT guitarist Ernie Cunnigan, better known by his stage name Ernie C, has weighed in on Donald Trump's presidency based on his first six weeks in the Oval Office.

Almost exactly two months after his inauguration, President Trump has seen his approval ratings sag and the political divisions of his election deepen.

Speaking to Metal Wani about how the current political climate in the United states has affected the lyrical content of the band's new album, "Bloodlust", Ernie said: "We kind of felt that we would have the president that we would have now — just 'cause of the way the climate of the country felt. It just felt like it was going in the wrong direction. So when he got elected, it wasn't a big surprise, 'cause everything was going in the wrong direction, with him running for office. So he brought up a lot of undercurrent; it came up bubbling up to the top."

He continued: "We had Obama for eight years, and everyone got kind of of comfortable. He was a good president, and we got a little comfortable, and we didn't actually notice all the underlying things that were going on. But Trump got here, and in six weeks — it seems like he's been president for a long time, but it's been six weeks — and he kind of tipped over the table, and everyone's kind of looking around, saying, 'What's going on?' But we felt it all along. You know what I mean?"

The guitarist added: "Twenty-five years ago, we did 'Cop Killer' as a warning. So now, twenty-five years later, it's still going on. Now we're saying, on this record, 'Watch out.' 'Civil War' and songs like that, it's kind of warnings of what we feel. 'Cause being a musician, you get the opportunity to travel to different places, travel around the world. We've gone around the world, and we felt that America, something was happening and it's not exactly right. And it's happening in a lot of different places now — from France to Italy to… even Sweden. A lot of things are happening."

Calling the process of making albums "a way of venting," Ernie praised protesters demonstrating against Trump's executive orders and offered his opinion on why Trump was elected in the first place.

He said: "We need for people to get out and about and get out and protest and even vote, but do it in a positive way and have a direction. You can't just say, 'I don't like the president.' You've gotta get out and vote and find something better. 'Cause this last election here in America, we didn't really have a good choice. That's why he won. There's no good choices anymore. People don't want to be in public office — good people. Every once in a while, you get good people in there."

He continued: "Obama was a good man. I always say, whether you liked him as a president or not, he was a good man, he had good values. Right now we've lost all our values. We have someone that's lying… He's on television right now lying. He's just lying and you know it's a lie, but there's still 40 percent of people who follow a person that lies, and they know it's a lie, and they're not worrying about it. They're worrying about getting a job and things like that that are more important. That's more important than morals. And morals help out in a lot of different ways."

In a recent interview with AllHipHop.com, Ernie's BODY COUNT bandmate Ice-T spoke about the likelihood of Trump being removed from office by Congress.

"I think Trump is going to be turned on by his own people," Ice-T said. "I don't know if it will be impeachment, but most of his pain is not going to come from the Democrats or liberals. By the way, this year was the first time I've ever been called a liberal. The people who voted for him will turn on him, because I don't think he's going to be able to bring them the jobs and we've already seen the healthcare replacement plan."

He added: "In the gang world, if you want to run things, the other gangsters will only give you, like, six months, and if it doesn't pay out, they're turning on you."

"Bloodlust" will be released on March 31 via Century Media Records. The disc was recorded with producer Will Putney (MISS MAY I, UPON A BURNING BODY), who also helmed 2014's "Manslaughter". The new CD features guest appearances by Max Cavalera (SOULFLY, SEPULTURA), MEGADETH mainman Dave Mustaine and LAMB OF GOD frontman Randy Blythe. The effort also contains BODY COUNT's medley of the SLAYER songs "Postmortem" and "Raining Blood".