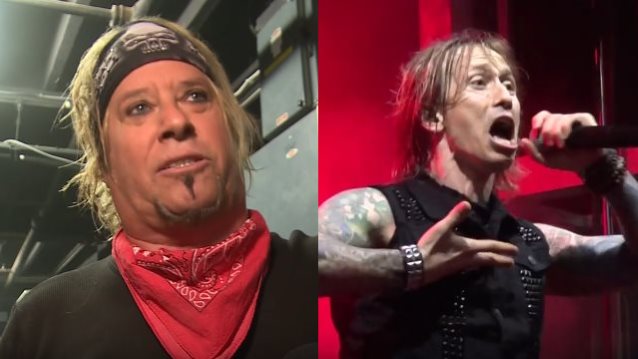 Bobby Blotzer has tapped former QUIET RIOT and ADLER'S APPETITE singer Seann Nicols (a.k.a. Sheldon Tarsha) to front his version of RATT when the band performs on March 18 at the Prairie Knights Casino & Resort in Fort Yates, North Dakota.

Nicols joins Blotzer's RATT as the replacement for Joshua Alan, who quit the band in January, explaining that he will be working and focusing on his original music this year.

Regarding how Seann landed the singer gig in his version of RATT, Blotzer wrote on Facebook: "In July [2016], when we were on the very successful RATT tour of 2016, and we had a few dropouts, I moved swiftly to a great array of awesome friends and great players — we never skipped a beat. Not a day or a show fell.

"When the other guys dropped, I asked our then-singer, 'Are you going too?', because the road might not be as easy as everyone thought it might be. I was apprised by a great buddy of mine that he knew of a ripping lead singer. I told our then-singer about him out of sheer honesty. And he replied to me as he did at every single show: 'No. You know how much I appreciate being in this, I'm in for THE LONG HAUL.'

"The last time I spoke to him was December 16th, Kentucky show.

"We continued through the year with 35 more shows, give or take.

"This other lead singer guy sent me his voice singing over our RATT songs with [Stephen] Pearcy's voice pulled out and him singing in place. Well, fucking hell, I was quite astonished, to be honest.

"I stuck it out with the other singer [because] my word is real. But he knew there was someone in the wings. And the guy I met over the phone in July ended up with our fellow touring band guys in QUIET RIOT. Cool, way to go, I thought (also not knowing why our ex-bandmate Mr. Jizzy Pearl was gone from QUIET RIOT). But the music business is an incestuous small world.

"There is still a war waging but I'm not going to get into those specifics.
I will, though, give you a little taste of what I was sent on the road in July 2016. I wish I had future vision then."

A recording of Seann Nicols singing the RATT song "Lovin' You Is A Dirty Job" can be heard below. Also available is footage of Blotzer, Nicols and thre other musicians performing the RATT hit "Round And Round" on March 5 at the Balz Magazine Release Party at the Mas Fina Cantina in Carlsbad, California.

Blotzer has spent the last year and a half battling the other three members of RATT's classic lineup in court. At the same time, he has been hitting the road with his version of RATT, which, in addition to Alan, most recently included guitarists Mitch Perry (TALAS, HEAVEN, STEELER, MSG, LITA FORD) and Stacey Blades (L.A. GUNS) and bassist Brad Lang (Y&T).