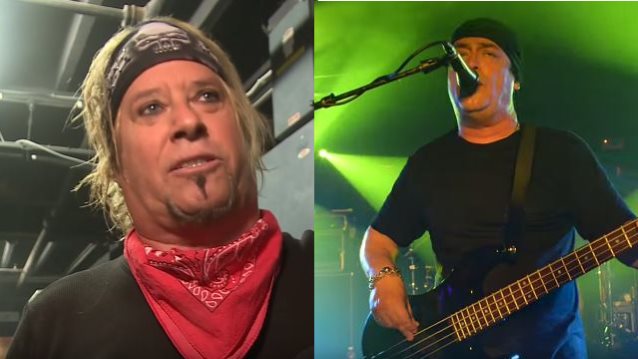 Bobby Blotzer has slammed his former bandmate Juan Croucier, saying that he "would rather have surgery on [his] cock with no anesthesia" than be subjected to the bassist's "disturbingly horrifying" stage moves.

Blotzer has been embroiled in a legal battle with Croucier and other members of the classic RATT lineup over the rights to the band's name.

Since 2015, Blotzer had been playing shows under the name RATT with a lineup in which he is the sole member from the band's '80s heyday. He has pitted himself against Croucier, founding singer Stephen Pearcy and guitarist Warren DeMartini, who reunited last October for a surprise performance on a Monsters Of Rock cruise. The trio has since announced a series of RATT shows, including high-profile sets at Maryland's M3 Rock festival and Oklahoma's Rocklahoma, and has issued cease-and-desist letters to concert promoters in an attempt to block the Blotzer version of RATT from performing under that name.

After someone uploaded a short clip of RATT'S JUAN CROUCIER performing last month in San Antonio, Texas, Blotzer took to Facebook to share the video and disparage the bassist's stage presence, writing in a since-deleted post: "I would rather have surgery on my C**K with no anesthesia than to have to ever see this anywhere in my life again. Man, that's really disturbingly horrifying to see. A purgerer [sic] and a spazzorama freak! Seriously, can someone really say, 'Man, that was really great'? Looks like he's riding a broom horsey!"

Blotzer previously publicly insulted Croucier's appearance in January, comparing the bassist to "Danny DeVito with a headband on" while repeatedly referring to him as "Crucifer."

Earlier in the month, Blotzer confirmed that former QUIET RIOT and ADLER'S APPETITE singer Seann Nicols (a.k.a. Sheldon Tarsha) will front his version of RATT when the band performs on March 18 at the Prairie Knights Casino & Resort in Fort Yates, North Dakota.

I would rather have surgery on my C**K with no anesthesia than to have to ever see this anywhere in my life again.