Retroactive Records has annouced the signing of the Italy-based thrash/power metal band BOARDERS. The group's new album, "The World Hates Me", is scheduled for release in January 2009.

A band that can trace its history back to the late Eighties, BOARDERS presents a unique melding of the aggressive and melodic that draws extensively from the musical trends of the decade in question. And nowhere is that more evident than in the group's thrash heavy material in that "Schmertzgarten", "Deliver You Back To Hell", "For What It's Worth" and "W.P.D." all deliver a sound certain to garner the interest of those into MEGADETH, METALLICA, TOURNIQUET and old-school DELIVERANCE. As a matter of fact, BOARDERS once received acclaim in Italy — back in their pre-Christian days — as a MEGADETH cover band; hence, the inclusion of the old MEGADETH song "In My Darkest Hour" makes perfect sense. A more melodic aspect to the band's songwriting skills, on the other hand, can be found in the straightforward metal and hard rock direction taken on "True Rebellion", "Baptized With Fire" and "Jump For Joy". Fast, energetic and catchy, these are three up-tempo numbers that bring to mind BRIDE (both late Eighties and early Nineties era), IRON MAIDEN, BARREN CROSS and SACRED WARRIOR.

"The World Hates Me" track listing: 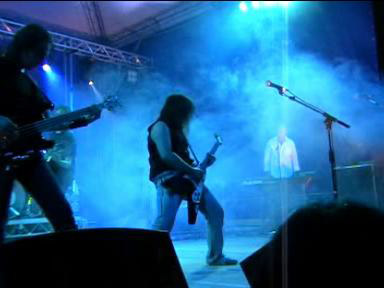