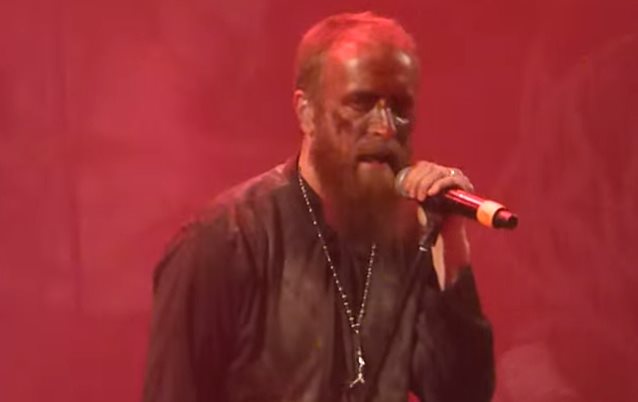 Fan-filmed video footage of the Swedish/British death metal supergroup BLOODBATH, which features in its ranks KATATONIA's Jonas Renkse and Anders Nyström, along with OPETH's Martin Axenrot and PARADISE LOST's Nick Holmes, performing on June 20 at the Copenhell festival in Copenhagen, Denmark can be seen below.

Holmes made his BLOODBATH debut on the band's latest album, "Grand Morbid Funeral", which was released on November 17, 2014 via Peaceville. The effort features guest appearances by Chris Reifert and Eric Cutler from AUTOPSY.

"Ever since I got into 'Lost Paradise' back in 1990," Renkse told Metal Hammer magazine, "Nick Holmes has been one of my favorite growling vocalists out there. He was always audible and articulate but still deep and definitely morbid. It is a great pleasure to work with him some 25 years later after I was introduced to his thunderous roar!"

Added Nyström: "Little did I expect to be working with the voice behind the death metal classic 'Lost Paradise', or the genre-defining 'Gothic' and yet here we are decades later, fullfiling another death metal dream. With his sinister and ominous vocal delivery, it's an absolute pleasure to make Old Nick the bell-ringer in BLOODBATH's 'Grand Morbid Funeral'!"

Regarding the musical direction of "Grand Morbid Funeral", Nyström said: "We're proud of all these different styled releases and we loved doing each and every one of them, but the objective was never to settle with a certain style, so our time has come to shift once more.