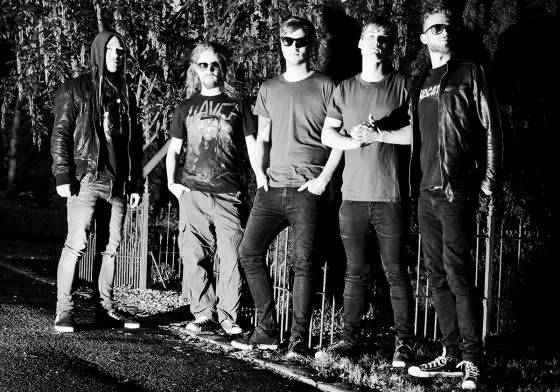 BLOOD LABEL made a name for itself in its native Denmark with the release of a critically acclaimed debut EP, "Existence Expires", in 2011 and three consecutive tours of Denmark supporting some of biggest names in metal such as ARCH ENEMY, ENTOMBED and VADER.

On "Skeletons", BLOOD LABEL fuses the immense energy of extreme metal with clear influences of alternative rock in 12 distinctive songs wrapped in a thick, voluminous sound.

"With our debut album, we just went for it in hope of finding our very own niche in the world of metal — and we think we did," explains BLOOD LABEL vocalist Kenneth Klitte Jensen. "We spared no expense and involved ourselves only with the best people Denmark has to offer."

A lyric video for the first single, "Shotgun-Blown In The Face" can be seen below.