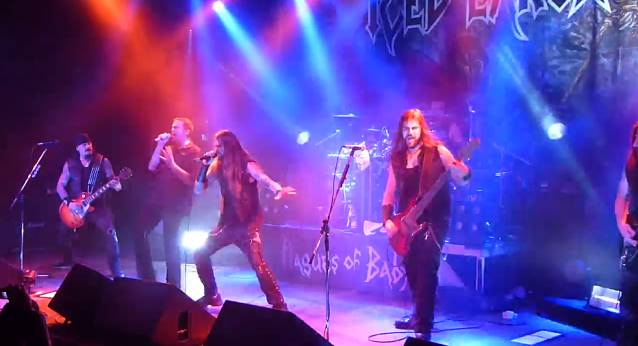 Hansi Kürsch of BLIND GUARDIAN joined ICED EARTH on stage on February 13 at Zeche in Bochum, Germany to perform the song "Among The Living Dead". Fan-filmed video footage of his appearance can be seen below.

Asked how the opportunity came up to have Hansi lay down guest vocals on the studio version of "Among The Living Dead" during the recording sessions for ICED EARTH's latest album, "Plagues Of Babylon", ICED EARTH guitarist/mainman Jon Schaffer told Metal Exiles: "Well, the thing of it is, because we were in Germany [recording the new ICED EARTH CD], and literally like an hour and a half from Hansi's house, it was pretty easy. That's different than doing something like [the] DEMONS & WIZARDS [project with Hansi] where you have to get together, write songs. And I mean, Hansi came into the studio for one day. He got there around two in the afternoon, and he left at I think 10 or 11 that night. That's a whole different thing, coming in and singing parts that are already written, than getting together and writing songs... That's something that can take a couple months. Then you have to produce the record, and go out on tour and for both of us to do a DEMONS & WIZARDS cycle, we would both need a year of time to make that a reality, and that's just not a reality right now because ICED EARTH is too busy, BLIND GUARDIAN is too busy. So I talked to Hansi while we were in Germany doing pre-production for the tracking, and that was also pretty close to his house, and he came to visit us and I played the song 'Among The Living Dead' for him, and I told him, 'I would love for you to do a verse in this song.' He agreed, and said it would be cool, and, of course, he'd be up for that. And then a little bit later, I mentioned to him that normally when I'm working in Indiana or Florida, I have a group of backing vocalists that I can call upon to sing choir parts on the album, on the choruses. And being in Germany, I was a stranger in a strange land, so I called Hansi, and he said he'd be happy to help out, and that he had a friend he could bring along too. So, that's how that worked out."

"Plagues Of Babylon" was recorded at Principal Studios (KREATOR, IN EXTREMO, GRAVE DIGGER) in Senden, Germany and was mixed at NHow Studios in Berlin, Germany. Guest vocals on "Highwayman" were laid down by VOLBEAT frontman Michael Poulsen and SYMPHONY X/ADRENALINE MOB singer Russell Allen. Guest vocals on "Plagues Of Babylon", "Among The Living Dead", "Democide", "Resistance" and "If I Could See You" are by Hansi Kürsch. The cover and additional artwork was created by Eliran Kantor (TESTAMENT, ATHEIST, HATEBREED).