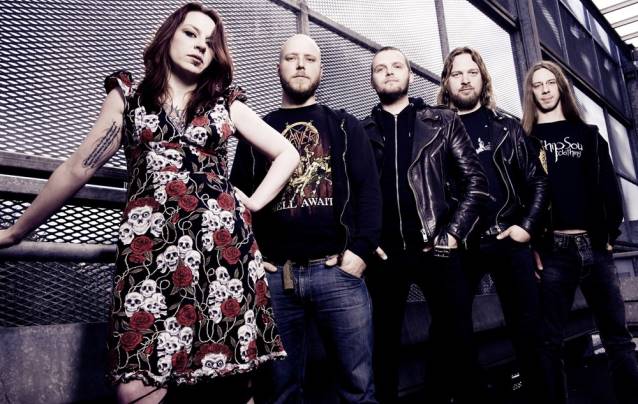 "Disciples", the new video from Belgian metallers BLIKSEM, can be seen below. The clip was shot during the band's Spanish tour in November and is a high-octane, live iPhone raw power impression of their Iberian trip, which includes footages of their live performance for Spanish TV.

"Disciples" is taken from BLIKSEM's debut album, "Face The Evil", which was released on February 25, 2-13 (three days earlier in Germany) via Alone Records. Combining blistering tandem guitars, thrashing drums, pounding bass and furious vocals, the resulting eight songs not only explore themes including revenge, oppression and madness but also celebrate the timeless glory of metal. Mastering was done by Herbrand Larsen (ENSLAVED) at the Earshot Studio in Bergen, Norway.

Lightning is one of the most spectacular displays in nature. Bolt temperatures hotter than the sun. Shockwaves radiating out in all directions. In Dutch, this deadly natural phenomenon is called "bliksem." A fitting name for an electrifying five-piece thrash band from Antwerp.

In late 2008, their quest to find a singer on par with Chuck Billy or Dave Mustaine took an unexpected and brilliant turn with the arrival of Peggy Meeussen. Her commanding razor-edged vocals are reminiscent of the late Dawn Crosby (DÉTENTE, FEAR OF GOD) and Nicole Lee (ZNÖWHITE), slicing through the existing legions of goth or guttural female-fronted bands.

In 2010, the band recorded its first EP, which got rave reviews in numerous magazines/e-zines such as Germany's Rock Hard, Aardschok, Lords Of Metal, France's Rock Hard and Rock Tribune as well as alternative-oriented press. Critics praised the quality thrash and some went as far to declare BLIKSEM the best thing to happen to the genre in years.

In 2011, BLIKSEM expanded its horizon, playing shows in the Netherlands, Germany and Switzerland, along with a fiercely convincing performance at Slovenia's Metalcamp festival.

The band went on to play Holland's Paaspop, which featured fellow heavy acts like HELL, ENSLAVED and ACCEPT as well as Dutch chart-toppers, and the renowned Eindhoven Metal Meeting (with EXODUS, HEATHEN, IMMORTAL and other metal greats). The momentum continued, and BLIKSEM was asked to support CHANNEL ZERO, ANGEL WITCH, VANDERBUYST and PRONG. Meanwhile, BLIKSEM created a buzz in the leading alternative media in the Benelux, including 3voor12/VPRO and Kindamuzik.nl, which called them one of the bands to watch in 2012-2013.