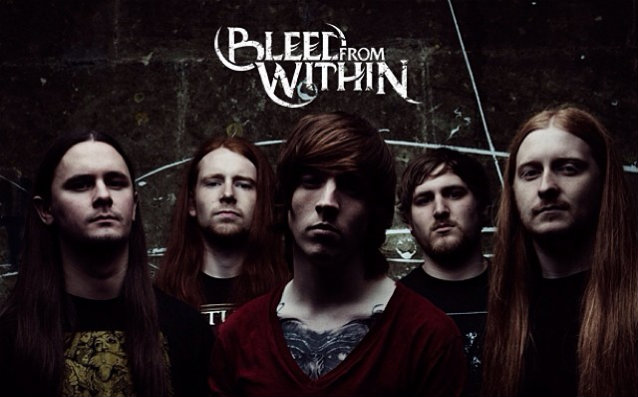 "I Am Oblivion", the new video from the Scottish metal act BLEED FROM WITHIN, can be seen below. The song comes off the band's third full-length album, "Uprising", which was released in March in Europe and April in North America via Century Media Records. The CD features artwork by Tom Bates.

"I don't want to slag anyone off, but we never wanted to be part of some trendy scene," says BLEED FROM WITHIN frontman Scott Kennedy. "We're a metal band, pure and simple.

"The first two albums were good but maybe we didn't get our message across to as many people as we should have done. Everything's been building up towards this new one. This is the album we always wanted to make."

"Uprising" was produced by Martyn "Ginge" Ford (BULLET FOR MY VALENTINE, TRIVIUM), Adam "Nolly" Getgood (PERIPHERY) and Romesh Dodangoda (FUNERAL FOR A FRIEND, SYLOSIS), and was mixed and mastered by Logan Mader (GOJIRA). It includes guest vocals from CANCER BATS and AXEWOUND frontman Liam Cormier on the song "The War Around Us".

"We're all so fucking happy with this record, man," adds Kennedy. "It's a massive adrenaline rush from beginning to end.

"We always knew we were capable of something this good, but this is the first time we've really achieved the best possible result. I think it proves you can make a great metal album without using gimmicks or trying to win over the trendy hardcore kids. This is an album for metalheads like us."