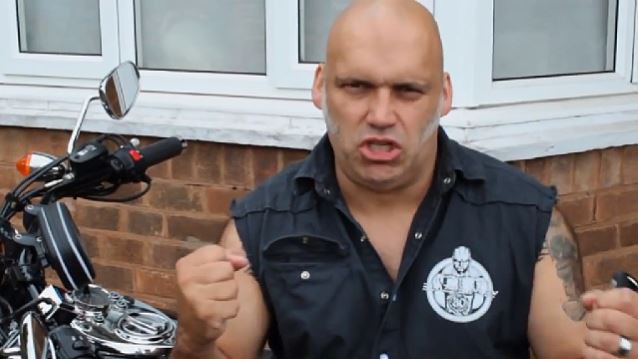 In a recent interview with Greg Prato of Songfacts, British heavy metal vocalist Blaze Bayley (IRON MAIDEN, WOLFSBANE) spoke about the songwriting process in IRON MAIDEN for the two albums (1995's "The X Factor" 1998's and "Virtual XI") that featured him as the lead singer.

"That's where I learned so much from [IRON MAIDEN bassist and main songwriter] Steve Harris," Blaze said. "He's just great.

"No music was written before I started recording 'The X Factor', so Steve said, 'I don't care who has the ideas that go on the album, they've just got to be great ideas.' So it doesn't matter who writes the song, it just has to be a great song. That's reassuring.

"I got quite a few of my ideas onto a work with Steve or with Janick Gers [guitar] that became part of 'The X Factor'. The first single from 'The X Factor' was my lyrics for 'Man On The Edge'.

"In some situations, Steve likes to come along with a completed idea — he'll have something in his mind that he really wants a certain way.

"I've learned since working with Steve a lot more about how to get that idea from your mind into the recording and into the arrangement. Whereas before, it would be very hit-and-miss. 'Why didn't this idea turn out so well and that one did? And why didn't this song sound anything like my idea and this one did?' Working with Steve Harris and seeing the way he puts things together, that really helped.

"And the other thing is self-censorship. There's not a lot of second guessing with IRON MAIDEN. It's, 'Does this feel good? Does this make sense? Does this move you?' Then 'It's good, that's it.' We don't think about it anymore, we'll do it. Generally speaking, it's trusting your instincts and your gut feeling.

"I came up with 'Man On The Edge'; I thought it was a very good idea. Steve said, 'Yes, this is a good idea.' So that's a huge boost from someone who's written some of the all-time classic songs.

"When I worked on one of the ones that we did together, 'The Edge Of Darkness', which is based on the 'Apocalypse Now' movie, it didn't really have a chorus as such. Well, there's quite a few IRON MAIDEN songs that don't have conventional chorus or conventional fallouts, but they make sense as musical pieces. We call them 'songs' as a convenient name. That was a big part of the experience in IRON MAIDEN.

"So there's a collaborative thing there, which we did on 'Virus'. And I collaborated with Steve on 'Futureal' and another couple of songs. There's also en element of, 'Bring in something that's done and see what people make of it and if it's good enough to get everybody's attention and make them feel good.' So that's what it was like.

"One of the sadnesses of my life, a twinge of sadness, is I was working on the lyrics and melodies for a third IRON MAIDEN album when they fired me. So a lot of those ideas that I was going to use on a third IRON MAIDEN album are actually on my 'Silicon Messiah' album: 'Stare At The Sun', 'Ghost In The Machine', 'Born As A Stranger', 'The Launch'. A lot of the ideas I'd already got on my dictaphone or got lyrics sketched out, then I didn't get the chance to work with the guys.

"But I'm so proud of my 'Silicon Messiah' album. It turned out great. I put that level of satisfaction that I have with that to the experience I had with IRON MAIDEN songwriting and with everything I learned there. I never doubted myself after that like I may have done before. Now if I feel it's good, I'll follow that idea through."

Speaking to GetYourRockOut at this past July's SOS Festival, Blaze stated about his work with MAIDEN: "People seem now a lot more interested in what I do and people view my period with IRON MAIDEN in a much different way than I think at the time… It's 20 years ago that I joined IRON MAIDEN and it's 30 years since I started singing, and all of these kind of anniversary dates have come together. And I think people take a fresh look at it now, and they go, 'Well, 'The X Factor' and 'Virtual XI' albums were the start of a different era of IRON MAIDEN.' And outside of the U.K., people are a lot more fond of those albums. So it's really interesting. And people know me, I think, as much in the U.K. for WOLFSBANE."

The 51-year-old Bayley, who was born in Birmingham, was the original frontman in WOLFSBANE, but left in 1994 to replace Bruce Dickinson as the lead singer of IRON MAIDEN.