"Yes, it's true, we have in fact changed our name to BLACKGUARD. One of the main reasons for this change was to avoid possible legal action against us. Our new European label (soon to be announced) informed us of this and asked if we'd be willing to change names, which we obviously said yes to. This was not an easy decision, but it was a necessary one to avoid possible future complications. I hope you all understand. This is the end of an era for us, but it is also a new beginning. With this change comes new labels (to be announced), new management, and, of course... new tours."

BLACKGUARD recently posted a new song, "The Sword", on its MySpace page. The track, which features a guest appearance by vocalist Alissa White-Gluz from THE AGONIST, comes off BLACKGUARD's new six-song EP, "Another Round" (released under the PROFUGUS MORTIS banner), which came out on November 25 via Prodisk.

According to a press release, "Another Round" features "the most epic and folk-inspired PROFUGUS MORTIS material to date. The new CD is expected to outsell the band's debut, '…So It Begins', which sold 2,000 copies in Canada alone."

"Another Round" track listing:

BLACKGUARD will team up with Ireland's PRIMORDIAL, Switzerland's ELUVEITIE and Finland's MOONSORROW for next year's PaganFest USA tour. The first date of this unique trek has been exclusively revealed on the PaganFest USA MySpace as May 7, 2009 at Chicago's Powerfest. 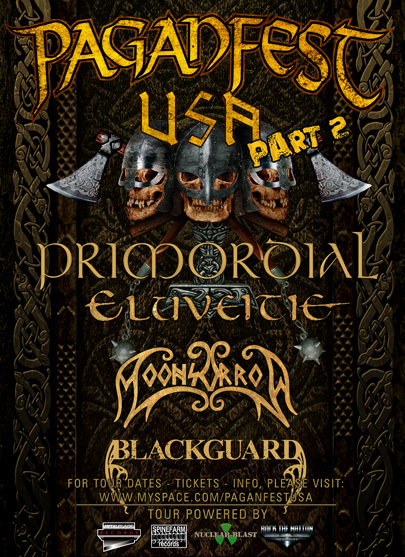