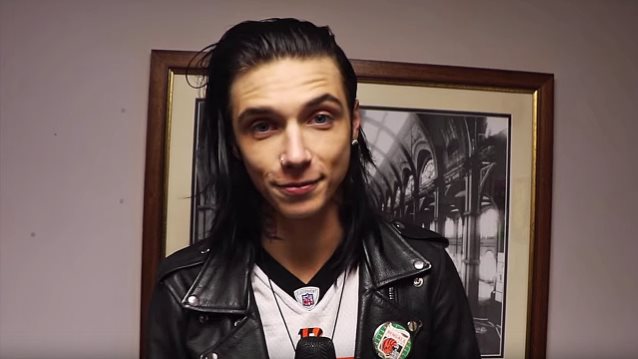 On the songwriting process in BLACK VEIL BRIDES:

"Everybody writes in their own way, I think, everywhere we are, whether it's guitar players having a riff, or one of us having an idea here and there. But I think we generally write when we're together, or when we're in a position of being in a studio situation. Our one guitar player, Jake [Pitts], has a home studio. So does [the other guitarist] Jinxx [Jeremy Ferguson]. It's about writing riffs, coming up with ideas — melodies, lyrics, those kinds of things — and then when we're together, compiling them that way. We're not a band that's sitting in a dressing room, smacking our knees and humming along and singing a song that way."

On whether BLACK VEIL BRIDES writes any music while on the road:

"When you're a band that has kind of more theatrical stuff — three-and-a-half-minute-long guitar solos and those kinds of things… I mean, the concept record alone that we did, there's no way to really write that on the road. But you can get the groundwork and the idea that way. There was a song that went on that record that CC [Christian Mora, drums] wrote on guitar, and I think that that was on the road — just writing a riff — and then the guitar players took it and built it around and made a song. Stuff like that happens, but it's very rare that we go front to back on a song on the road. The thing that happens the most back here is rehearsal. I don't think you'll ever meet a pair of guitar players, or anybody, that would be as diligent about rehearsing and making sure that they're tight for the shows. I mean, before the show, everybody has their instruments and is playing and making sure that we're ready to go out there and kick ass."

On spending time apart when BLACK VEIL BRIDES is off the road:

"We've all been together in this crazy marriage for the better part of the last… over half a decade, and so to spend time apart and kind of reset, I think it's always beneficial for us. Look, we're all friends — we all enjoy laughing and spending time together. We're not one of those bands that is at each other's throats all the time. But when we do spend the time apart, we come back and maybe we've all got ideas and maybe we've all got fun things going on, and it makes it that much better to be together and in the same room."

On taking time to write and record the follow-up to BLACK VEIL BRIDES' 2014 self-titled album:

"I think at this point, we've never had an opportunity, in all of our career, to make a record that had some time behind it. Every record that we've done has been a really quick turnaround, and that's not by design — that's because, times being what they are, the record label goes, 'Have us a record now.' And we go, 'We wanna do this crazy concept record.' And they go, 'Well, you have two months to do it. So good luck with that.' Now, we've kind of… By virtue of the fans, we've got an opportunity to take a little bit of time. I don't think we'll be the band that you'll see years go by without a record, but I don't think that you're gonna see another BLACK VEIL BRIDES record in four months. But we're certainly starting… You know, we're starting the writing process. We'll be in the studio soon. The goal is by the beginning of [2016] to be working on something new, and then to perfect it. And we'll release it when we think it's ready."

BLACK VEIL BRIDES released its first-ever concert DVD and Blu-ray, "Alive And Burning", on July 10. The cover artwork for the set was designed by the band's longtime friend and previous album cover illustrator Richard Villa.

"Black Veil Brides" was helmed by producer Bob Rock, whose resume includes albums by METALLICA, MÖTLEY CRÜE, THE CULT and many others.