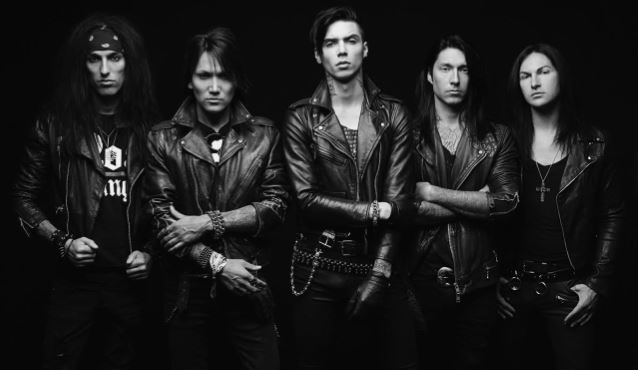 The self-titled fourth studio from Los Angeles theatrical rockers BLACK VEIL BRIDES sold around 30,000 copies in the United States in its first week of release to debut at position No. 10 on The Billboard 200 chart.

"Black Veil Brides", was helmed by producer Bob Rock, whose resume includes albums by METALLICA, MÖTLEY CRÜE, THE CULT and many others.

The track listing for the album is as follows:

Speaking about the lyrical content of "Black Veil Brides", BLACK VEIL BRIDES frontman Andy Biersack told Revolver magazine: "[it's] very angry. I feel like in a lot of ways I had a lot of aggression towards the state of how we were perceived. Obviously some people will see, 'Oh, he's the guy who yells at awards shows' or whatever. But in a lot of ways, we had made ['Wretched And Divine'] so large in scale and had this grand story and we did the film. There was a certain level of frustration when you feel you do this thing so large and great, but there were so many people who just refused to listen to the songs, like, 'They're a faggy makeup band.' I think on some level, when I was younger that used to affect me. In a way, I enjoyed looking back on those feelings because I don't really care anymore. I can't write about things in the moment anyway, but in a way I wanted to re-tap into those aggressive feelings. I think if anything thematically there is a lot more angst on this record in general. I'm shooting from the hip a lot more on this one. There's no grand story and the metaphors aren't as strong. So it's a return to form — more like our first album, lyrically."

He added: "I would say when we made the previous record, it was emotionally the hardest period in my life for no other reason than my own misgivings and self-destructive tendencies and I got into a weird funk. It wasn't one thing that spurred it — just sometimes you go through a weird period.

"When making the movie, it was a very strange time for me. I was so happy about making the album and the process of the concept, but I was not a happy person. I think the band would attest to that and I imagine it was not easy to work with me. I was not being a team player. I was very much, 'This is what we're going to wear and sound like.' There was not a lot of band voting going on. So with this record, I really wanted to make a concerted effort to bring back the elements of being in a band and being a good friend to my bandmates.

"It's not easy to admit to everyone when you fucked up. Months prior to making this album, I really wanted to go to everybody and apologize for anything I had done in being a militant asshole — for the lack of a better term. It really brought the vibe back and the experience and nurturing from Bob. We're getting along better as a band now as friends than we have in five or six years. It really does feel like a rebirth."