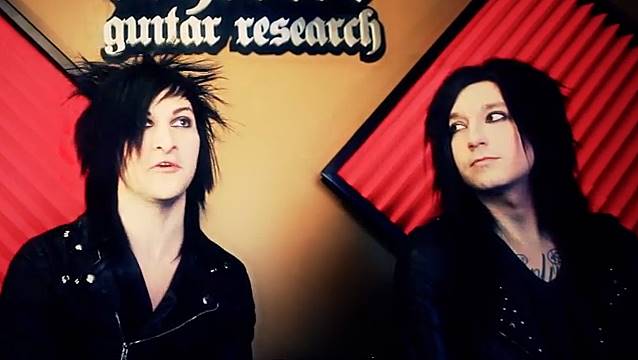 Episode 219 of the "Iron City Rocks" podcast (web site) features an interview with guitarists Jake Pitts and Jinxx of Los Angeles theatrical rockers BLACK VEIL BRIDES. They talk about their experience on the 2013 Vans Warped Tour, their new deal with Schecter Guitars and the band's plans for the remainder of the year. You can now listen to the chat using the audio player below.

In a recent interview with Artisan News, BLACK VEIL BRIDES vocalist Andy Biersack stated about the progress of the songwriting sessions for the band's follow-up to this year's "Wretched And Divine: The Story Of The Wild Ones": "We've got nothing more than some concepts, and that's usually when we do our best stuff — when we don't get too 'heady' about it and we don't try to delve too deep into something before it's ready. We did that going into 'Wretched And Divine'. Beforehand, we had started writing on the road and we went in with a producer, and it just didn't click, 'cause that's not the way that… The dynamic of the band, artistically, has never worked that way. So this [time] we're gonna try to go into it where, like we did when we finally met with [producer] John Feldmann and we made the ['Wretched And Divine'] record — we just jumped into something with a concept and that's about it. So I think that that's when we work the best — kind of that pressure-cooker situation, in a way, where you know what you wanna do and you have to do it now. But it would be nice to be able to do that over an elongated period of time as opposed to doing it in two weeks and then trying to get the record out."