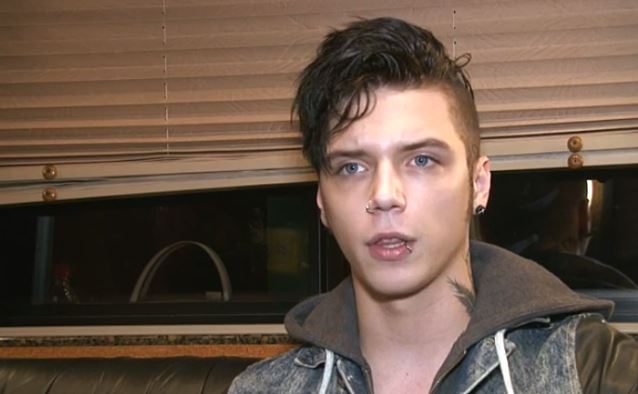 Vocalist Andy Biersack of Los Angeles theatrical rockers BLACK VEIL BRIDES spoke to Artisan News about the progress of the songwriting sessions for the band's follow-up to this year's "Wretched And Divine: The Story Of The Wild Ones".

"We've got nothing more than some concepts, and that's usually when we do our best stuff — when we don't get too 'heady' about it and we don't try to delve too deep into something before it's ready," Andy said (see video below). "We did that going into 'Wretched And Divine'. Beforehand, we had started writing on the road and we went in with a producer, and it just didn't click, 'cause that's not the way that… The dynamic of the band, artistically, has never worked that way. So this [time] we're gonna try to go into it where, like we did when we finally met with [producer] John Feldmann and we made the ['Wretched And Divine'] record — we just jumped into something with a concept and that's about it. So I think that that's when we work the best — kind of that pressure-cooker situation, in a way, where you know what you wanna do and you have to do it now. But it would be nice to be able to do that over an elongated period of time as opposed to doing it in two weeks and then trying to get the record out."

Biersack also spoke about the chemistry within BLACK VEIL BRIDES and the band's musical evolution over the last few years leading up to the release of "Wretched And Divine: The Story Of The Wild Ones" and the record's current touring cycle.

"Yeah, it's crazy," Andy said. "We've been touring together for, what, almost half a decade, and that's it. We don't have the long, storied history, but we've gone through so many evolutionary changes and even stylistically in the band, we've never released two records that sounded the same."

He continued: "I think that the next step for the band is to do something we've never really done before, which is to take a minute and really evaluate where everything around us is and what we wanna start writing about and what the next step is for the band, logically. But also just on an artistic feel, let it be organic and let us feel something new, because we've always been… With the exception of 'Wretched And Divine', the first two records were, 'OK, now you have to make a record. Go do it. You have this amount of time, you have this amount of money. Please get it done.' With 'Wretched And Divine', we had more of an opportunity to do something that was outside the box. We still didn't have much time, but we were allowed a little bit more of an opportunity to express ourselves. So now, I think, we're the band that I think we should be. I think we're at the right place. We're the best that we've ever been musically. The camaraderie within the band is at an all-time high. And it's not always been that way. There's certainly been fights inside of this band, like any band, over the last couple of years, but I will tell you that on this tour, there's not been anything that's been negative; it's been a very positive experience and we've all had a lot of fun. Because, again, we're all adults and we've been doing this long enough to know that those personality differences are not enough for you to try to ruin the career that you've paved. And I think sometimes bands forget that: 'Wow, we just can't get along.' Well, maybe you will soon. Just wait it out. You're not getting along today; just wait. Stay with the thing you love. And that's what we did. We've had our darkest moments and we've all had big in-fighting and everything, but we're best friends and we're brothers and we've gotten through it, just like we always will, so I'm excited to make another record with my four best friends."