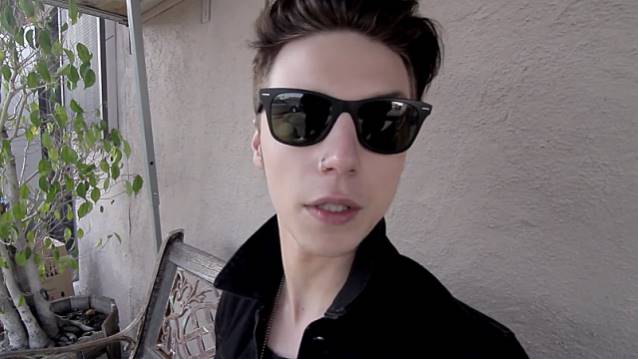 BLACK VEIL BRIDES premiered their new single, "Heart Of Fire", on England's BBC Radio 1 on Monday night (September 8). The track is taken from the theatrical rock act's self-titled fourth studio effort (also known as "IV"), which arrives on October 28. Frontman Andy Biersack told The Pulse Of Radio that the message of "Heart Of Fire" is simple. "The song 'Heart Of Fire' is about how time and circumstance change you and how the goal is always to not let the passion that you have for something that you love burn out because the world around you changes it," he said. "I mean, it's very interesting to look at a group of people that are in a band — I think we all are more passionate today about the band maybe than we've ever been, and that's a really cool thing. The song is really about allowing yourself to keep that passion burning for something that you truly enjoy."

"Heart Of Fire" is described in a press release as "an upbeat rocker that showcases the band's signature dual-guitar attack and driving rhythm section all behind a positive lyrical message the band has become known for."

To listen to "Heart Of Fire", go to BBC.co.uk and skip to the 33-minute mark in this week's "Rock Show" episode.

BLACK VEIL BRIDES will film videos for two singles later this week, including "Heart Of Fire", which will be shot in Santa Clarita, California.

"The plan is just to do something that is a high-impact performance video," Biersack told VH1 Radio Network's Dave Basner. "I think that the song calls for it. We're not going to do a whole lot of storyline in it. Obviously we made a whole movie out of the last record so we really want something that is very performance based and kind of shows more of what the live show is like. And also, it''s still going to be ridiculously over the top and theatrical, 'cause it's us."