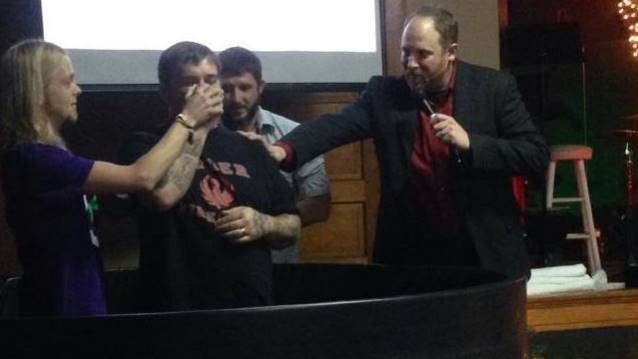 Says the group: "We ended 2013 in a very cool way and we hope [the photo above] will encourage anyone searching or in need of inner peace!

"As BLACK STONE CHERRY, we're not 'crazy Bible thumpers'. Don't get us wrong, we love to have a good time and rock out and all that fun stuff, but we do love us some Jesus!

"The whole band was there [when Chris was baptized] and it was an awesome thing!

"We realize how lucky we are to be living our dream in music, and we owe our gift to God!

"This isn't a 'publicity stunt' nor is it a 'political religious move.' This is simply a public display of what we are proud of and we hope that someone, even if just ONE person, is affected by this in a positive way… then that's what it's all about!"

The band's third CD, "Between The Devil And The Deep Blue Sea", sold 13,000 copies in the United States in its first week of release to debut at position No. 29 on The Billboard 200 chart. The effort was released on May 31, 2011 via Roadrunner Records.

This was the first time BLACK STONE CHERRY has not recorded in the South, this time taking up residence in Los Angeles to work with famed producer Howard Benson (THEORY OF A DEADMAN, DAUGHTRY, THREE DAYS GRACE). The new surroundings allowed them to strengthen their relationships as both band members and friends, ultimately a detail that sets "Between The Devil And The Deep Blue Sea" above previous recordings.