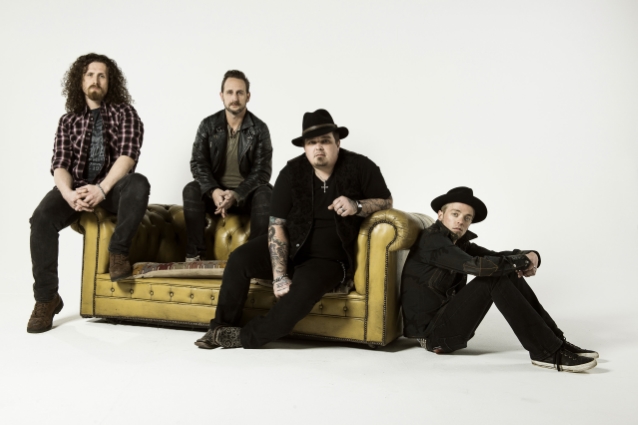 In a brand new interview with Denim And Blether, BLACK STONE CHERRY guitarist Ben Wells was asked how he and his bandmates find the opportunity to write new material when they spend so much time on the road. He responded (see video below): "It is hard sometimes. A lot of [2018's] 'Family Tree' [album] was written while we were on tour. We got to the back of the tour bus and we had a guitar and set up a computer and just recorded ideas. And that's fun, because it helps some of those days on the road — if you have days off where you're kind of just sitting around doing nothing, it keeps us going. So we're always being creative. It is hard, though, to be fully focused on writing new material while we're on tour, because you're in show mode. We're thinking about the show and the setlist and what songs we're gonna be doing, and we wanna get out and walk around and do stuff. So it's hard to dedicate enough time. But you've just gotta do it."

He added: "Yesterday at soundcheck, we came up with a new riff and I got my phone and recorded it and then we stored it. So when it does come time to actually write a new album, we've already got a lot of ideas that we've kind of been saving up. That's the good part about it."

BLACK STONE CHERRY will embark on a U.S. co-headline tour with THE LACS in the fall.

"Family Tree" came out in April 2018. As was the case on 2106's "Kentucky", the BLACK STONE CHERRY members opted to produce and track "Family Tree" at David Barrick's Barrick Recording in Glasgow, Kentucky, the same studio where the four-piece recorded its eponymous debut.