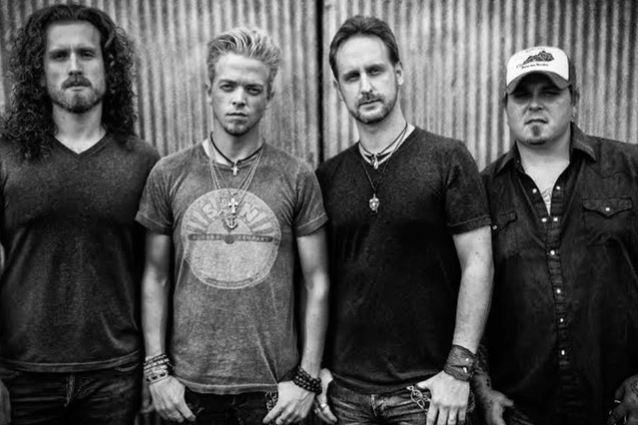 "Cheaper To Drink Alone", the new Blake Judd-directed video from Kentucky rockers BLACK STONE CHERRY, can be seen below. The clip was filmed on February 21 at Spillway Bar And Grill in Bowling Green, Kentucky.

"This video is the first time we have stepped outside of our comfort zone, only to end up further into our comfort zone," commented BLACK STONE CHERRY. "It's funny, it's light hearted, it's rock 'n' roll. It shows a side of the band that exists on a daily basis, and that is our love for ridiculous humor and not taking ourselves too seriously. We hope y'all enjoy it as much as we did creating it! We are also honored to have appearances of our friends from Number JUAN Tequila, Against The Grain Brewery, and Lzzy and Joe from our longtime buddies HALESTORM."

"Cheaper To Drink Alone" is taken from BLACK STONE CHERRY's fifth studio album, "Kentucky", which was released in April 2016 via Mascot Label Group. The CD was recorded at Barrick Recording in Glasgow, Kentucky. Taking a "back-to-the-roots" approach, the effort was produced in the same way and same place as BLACK STONE CHERRY's eponymous debut album, which broke the band out of the small southern backwater and onto the world stage.

BLACK STONE CHERRY guitarist Ben Wells told Metal Hammer magazine about "Kentucky": "This is the first time we [got] to self-produce. And most of the songs, with the exception of maybe two or three out of fifteen, are all written by us, the four of us. Which all of our songs always are — we might co-write with somebody — but this time, the majority of the songs are all written by us. So it feels really good to kind of have that creative freedom. It's raw, it's heavy. [We went] back to our hometown to record it, where we did our debut album. So we're kind of revisiting some of that old mojo that we had, and I think our fans have been wanting that from us for a long time now. These are probably some of the coolest songs we've written as far as the music and the melodies."