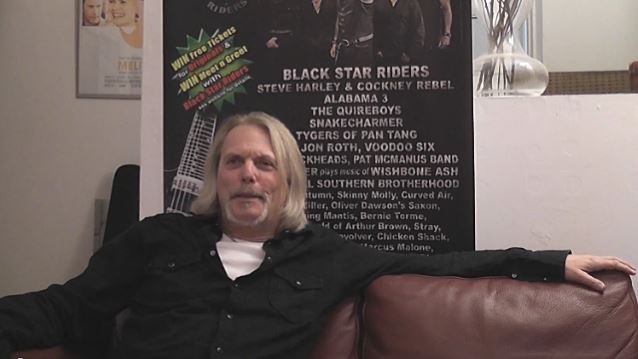 2014 has proved itself a landmark year for BLACK STAR RIDERS. The men in black took their acclaimed live show on the road in Europe and then stormed stages in the United States and Japan for the first time; the reactions have been nothing short of amazing!

2014 is also the year BLACK STAR RIDERS returns to the studio to record its as-yet-untitled sophomore album and follow-up to 2013's highly lauded debut release "All Hell Breaks Loose". It was originally announced that DEF LEPPARD frontman Joe Elliott would oversee production duties on the new material joined by longtime DEF LEPPARD sound guru Ronan McHugh. Unfortunately, due to unforeseen circumstances and schedule conflicts, Joe and Ronan have had to back out of the process.

Elliott explained: "It is with great reluctance that I have had to pull out of the production job for the BSR second album. When I agreed to do it after a great meeting with the boys, it was at was at a time when DEF LEPPARD weren't exceptionally busy. Things changed and I found myself in a situation where the amount of time I could allocate to the album would not have done justice to the record or the band. They deserve someone who can do the job without rushing it or having to bail out half way through due to other commitments. I KNOW they're are going to make a great second album and maybe sometime down the road, we can revisit the idea of working together again. Myself, Ricky [Warwick], and Scott [Gorham] have a very long-standing and firm friendship which goes back decades!! I wish them nothing but the best and much success with the new album."

"Joe is like a member of the family," shared BLACK STAR RIDERS vocalist Ricky Warwick. "I was very excited by the prospects of Joe working with us on the new record, but sometimes things happen that we cannot control. I know we will work with Joe in the future."

The great news is that this change in Joe's schedule has allowed BLACK STAR RIDERS to find someone they are all very excited to work with. Taking over the production duties will be heralded producer Nick Raskulinecz. Nick has been at the desk for a number of incredible releases from such artists as the FOO FIGHTERS, ALICE IN CHAINS, RUSH and MASTODON. "I have been a fan of Nick's work for some time,” Warwick stated eagerly. “So when it became apparent that Nick wanted to work with us, we were all very excited! He has done some amazing work with other artists in the past and I can't wait to hear what we manage to create together in the studio."

BLACK STAR RIDERS guitarist Damon Johnson added: "Nick is an amazing talent and I know he is going to help take BLACK STAR RIDERS to the next level. His résumé is staggering, his reputation is stellar, and his enthusiasm for our band and our songs is incredibly exciting."

"I was a fan of the first album, and I'm really excited about the songs they've written for their new record," said Raskulinecz. "I'm really looking forward to getting into the studio with them to help bring those songs to life."

BLACK STAR RIDERS is set to enter the studio in September to begin its recording sessions. A spring 2015 release is expected.