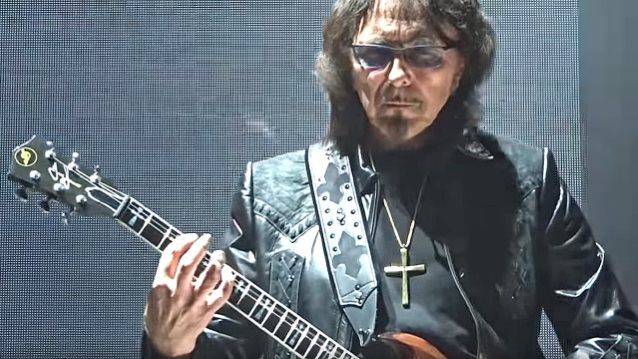 In a brand new interview with Australian Musician, BLACK SABBATH guitarist Tony Iommi was asked what advice he would give to young musicians in the day and age when many young bands forgo performing live to seek their fifteen seconds of fame on TV or the like. He responded: "Well, I think that's it, that's the key, you've got to get out and play live. Unfortunately, the way the business has gone, with TV and these shows, whatever they're called, I think you need to get out and play live, play to people; you can't go on and mime and not have all these gadgets behind you. [There is] nothing like being able to actually play. And not just to show off — you have to play from within yourself whatever you feel is good and that's it. You don't have to play a million notes a minute guitar-wise — you can go out and play with feeling — and that, to me, is so important. I mean, there's plenty of great players, but there's nothing better to me than to hear someone play with great feel. And I think with some of the newer guitar players, that's where they've missed it a bit; they've gone for all this fancy stuff. It comes out more emotionally in the music if you play what you feel."

Iommi said in a September 2015 interview that the band's current farewell tour, which began in January, is truly its last because he is not physically capable of doing it any longer. Speaking with the Birmingham Mail, Iommi explained: "I can't actually do this anymore. My body won't take it much more."

Iommi was also hospitalized last year with back problems, and he still requires blood tests every six weeks to monitor his lymphoma.