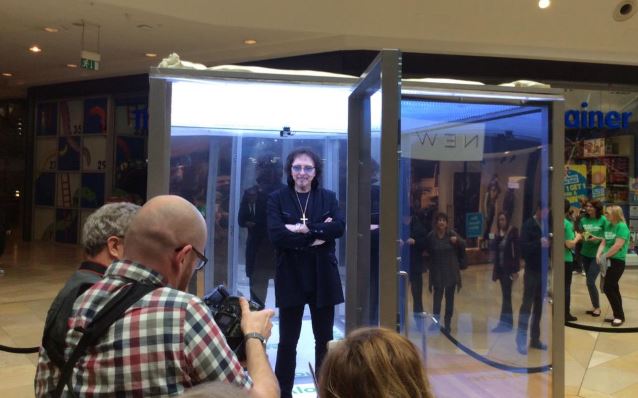 BLACK SABBATH guitarist Tony Iommi made an appearance this morning (Wenesday, August 26) at Birmingham, England's Bullring Shopping Centre outside Debenham's to bring awareness to Macmillan Cancer Support's "Not Alone" Isolation Box, which highlights the plight of lonely cancer patients in the U.K.

The experiential box, which allows people outside to see in but stops the person inside seeing out, aims to evoke the same feelings of loneliness and isolation many cancer patients experience after a diagnosis.

Iommi, who was diagnosed with lymphoma in early 2012, spent a few minutes inside the Isolation Box, much to the delight of nearby shoppers.

"I was in a bubble for a while — just like the isolation box," Iommi told BBC News.

"When I was diagnosed, I was absolutely devastated," he said. "They're talking to me, saying, 'You've got stage three,' and it's going in my head and I just felt somewhere else. And it was only later when I really broke down. I thought, 'That's it, it's the end.' And you really think that. But it's not. There are people who can help."

New figures released by the charity reveal an estimated 550,000 people in the U.K. — 22% of those living with cancer — suffer with loneliness as a result of their cancer. Research also reveals the devastating impact that loneliness can have on people's lives, with many forced to skip meals or attend vital appointments alone. At worst, this can result in patients refusing treatment altogether. Of those who are lonely, almost half (47%) feel this way despite having as much social contact as they want and more than half (56%) are married or have a partner, showing that loneliness can affect even those surrounded by family and loved ones.

The Isolation Box has been installed as part of the charity's "Not Alone" campaign. In an instant, members of the public are taken from the hustle and bustle of one of the busiest places into an isolated box with just their own reflection and the voices of real people talking about how lonely they felt after being diagnosed with cancer. Like so many people affected by cancer, they will be left feeling completely alone in a crowd.

Laura Keely, campaign manager at Macmillan Cancer Support, said: "We know only too well that loneliness can have a devastating impact on people lives. Quite often, friends and family simply don't understand what someone is going through and how utterly lonely a cancer diagnosis can make them feel. With 2.5 million people in the U.K. now living with cancer, we simply can't be there for everyone that needs us. That's why we are calling on people to reach out to someone affected by cancer today. Even the smallest gesture — offering a cup of tea and a chat — can make a massive difference."

To find out more about Macmillan Cancer Support and the "Not Alone" campaign, go to www.macmillan.org.uk/NotAlone or follow #NotAlone on Twitter.

Iommi in April dismissed rumors that his health was the reason why BLACK SABBATH canceled an appearance at this year's edition of Ozzfest Japan in November. The musician wrote, "I'm not sure how the rumor of my being unwell started as I was away on holiday!" He added, "Once you've had something like lymphoma, the fear that it will return never leaves. All I can say is that right now I'm fine and have regular blood tests."