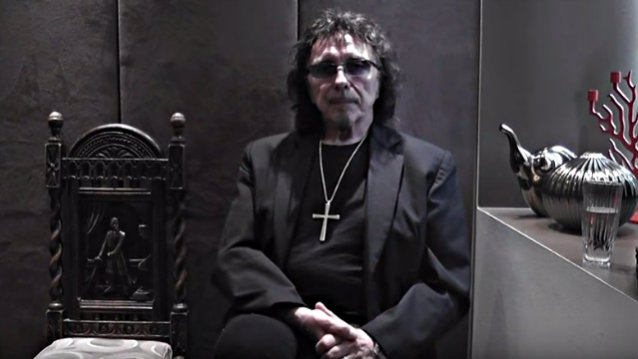 MetalTalk recently spoke to BLACK SABBATH guitarist Tony Iommi about "The End Of The End", a upcoming documentary movie of the band's last-ever concert, and "The Ten Year War" limited-edition vinyl box set. You can now watch the chat below.

Asked how he felt going into SABBATH's final show this past February, Iommi said: "Well, I think, in all the tour, it didn't feel like we were gonna end — it just didn't hit home at all until the end [laughs], really. The last show, we went on and played and it was a bit emotional, 'cause you're looking out, seeing people crying, which was very sad. You think all these people have been there for us for all these years, that looked to us as their heroes, and it's a lovely feeling. I felt a bit sad for them as well, really, and because we won't be seeing them as such on a regular basis."

According to Iommi, once the gig was over, "It still didn't seem like it was the end, because most tours are finished like that, and you all go home, and you think, 'We'll be back in six weeks to do the next tour,'" he said. "But, of course, it didn't happen on this one. But it was the same sort of vibe for a bit. And it still hasn't sunk in yet, because I've been involved with quite a lot of stuff since we finished, dealing the film stuff and the DVD and 'The Ten Year War' and stuff like that. We haven't had time — or I haven't had time time — to really even think about, 'Oh, we've stopped,' 'cause I haven't stopped. I'm still as busy as ever — apart from we're not flying everywhere, which is great."

Regarding his plans for the future, Iommi said: "There's a lot coming up; it's just a matter of picking and choosing what I wanna do. It's hard to say at the moment, 'cause I'm still involved with the SABBATH thing as far as putting this to bed."

He added: "There's loads of requests to put something together, and even musicians saying, 'Would you like to do something?' So it's great, really. It's really open."

The original lineup of SABBATH came together in 1969 with Iommi, Ozzy Osbourne on vocals, Geezer Butler on bass and Bill Ward on drums. That lineup recorded and toured through 1978, and periodically reformed through the '90s and 2000s for live work.