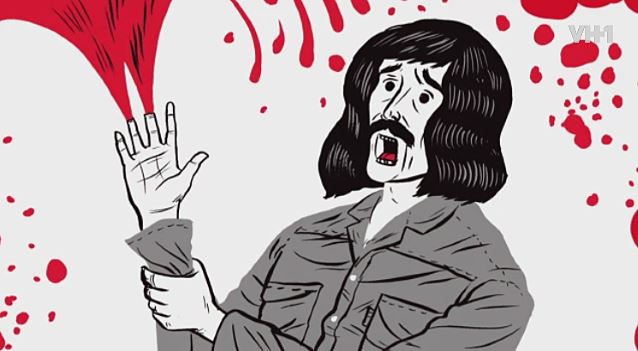 A new animated short which tells the story of how the tragic accident which caused BLACK SABBATH guitarist Tony Iommi to lose the tops of two of his fingers was inadvertently responsible for the creation of the heavy metal guitar sound which defines the genre and has reverberated through the ages to this very day can be seen below (courtesy of VH1.com).

"Fingers Bloody Fingers" is built around a new interview conducted with Tony Iommi specially for this project and was illustrated by noted U.K. artist Paul Blow, and animated by VH1 senior designer Kee Koo.

Iommi discussed in a recent interview with the U.K.'s Mirror how his life is going three years after being diagnosed with lymphoma. The disease forced Iommi and his SABBATH bandmates to work around both his treatments and his recovery periods while recording, promoting and touring the group's 2013 reunion album, "13".

Iommi explained, "After we released the album we went on tour and played 81 shows in 28 countries. I really enjoyed it, but it was tough… Every six weeks I had to fly home for treatment at the Parkway Hospital in Solihull, just outside Birmingham. I was hooked up to a drip and given an antibody that sort of coats the cancer cells and stops them spreading. Then I had to be home for two or three weeks recovering before I could join up with the band again."

Iommi continued, "To make matters worse, flying affects my blood cells now because of the cancer. By the time I got to the hotel I'd have anxiety, the shakes, all sorts of things I'd never had before. It was so bad I began worrying whether I was going to be all right."

The guitarist said it took him two months to recover once the tour was over, adding that he completed his treatment last summer.

But Iommi added, "The surgeon told me he doesn't expect the cancer to go away. There's a 30 percent chance that it could, but more than likely, it will come back and it could be any time. I look at life differently now. I could be here another 10 years or just one year — I don't know."

"13", the first SABBATH release in 35 years to feature Iommi, singer Ozzy Osbourne and bassist Geezer Butler playing together, was released in June 2013 and landed the band its first-ever No. 1 album in the U.S., also topping the chart in the U.K. and a number of other countries.

The band intends to work on one more album and head out on a final tour sometime in the next year.