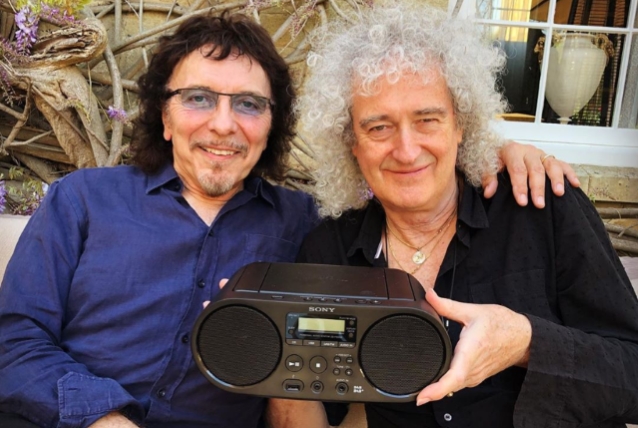 BLACK SABBATH guitarist Tony Iommi says that he has "found" about 500 riffs while recently spending time with QUEEN's Brian May.

Iommi made the revelation while captioning a new Instagram photo, in which he can be seen hanging out with the QUEEN guitarist, who is holding a small boombox. "Hard at work! In search of riffs — and finding about 500," Tony wrote.

Back in 2013, Iommi told the Birmingham Mail that he was discussing a possible collaboration with May.

The idea of working together came about when Iommi and May met up shortly after the BLACK SABBATH guitarist was diagnosed with cancer.

"When I was first ill, Brian May came to visit me at my house in Lapworth," Iommi said. "I played him some of my stuff, rock riffs that I'd never quite got round to developing, or decided not to use. He said I ought to do something with them.

"It's early days yet, and all my attention in on SABBATH for the foreseeable future, but we may well find some way of working together on them, and making them available in some shape or form.

"One of the ideas we had is that we could make the riffs available, get fans to use them in songs of their own, and see what they come up with. That way they'd effectively be recording with Brian and myself."

May elaborated on the idea: "I heard some of the hours of unreleased guitar jams Tony has on tapes and hard drives. I thought it would be great to make a compilation out of them.

"The idea was to put all these riffs out in some form so that people could build their own songs from them. You could make your own music with Tony Iommi on guitar. How great is that?"