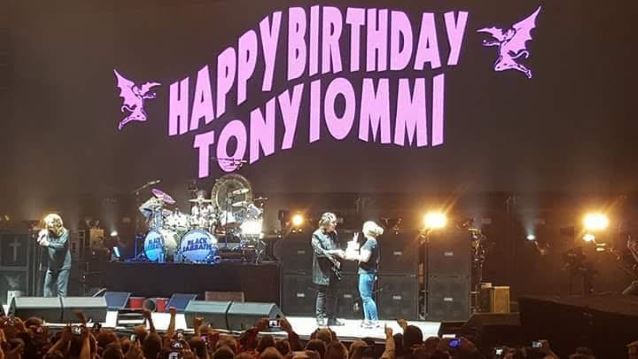 BLACK SABBATH stopped its show last night at The Palace of Auburn Hills in Auburn Hills, Michigan after the fourth song to recognize guitarist Tony Iommi's 68th birthday. After band introductions, SABBATH singer Ozzy Osbourne led the crowd in a "Happy Birthday" song sing-a-long while a cake was brought out onstage. A video graphic that read "Happy Birthday Tony Iommi" was put on the stage screen.

Iommi said in a September 2015 interview that the band's current farewell tour, which began in January, is truly its last because he is not physically capable of doing it any longer. Speaking with the Birmingham Mail, Iommi explained: "I can't actually do this anymore. My body won't take it much more."

Iommi was also hospitalized last year with back problems, and he still requires blood tests every six weeks to monitor his lymphoma.

Ozzy told The Pulse Of Radio that Iommi never let his treatments slow him down during the making of SABBATH's comeback album, "13". "My hat goes off to him 'cause he really is Iron Man," the singer said. "I mean, that chemotherapy knocks you sideways, you know. I mean, when my wife had cancer a few years back, she was having three chemo things a month and it would knock the life out of… Literally every time she'd have a treatment, she'd have a seizure. It's scary stuff. But he came down, plugged in and carried on. He's my hero, I swear to God he is."

Iommi said that SABBATH's "The End" tour will encompass about a year, including breaks, and that the set list will trace "the band's career from our early days in Birmingham. All the fan favorites will be in there, and we're looking to include some songs we've rarely performed live, too."