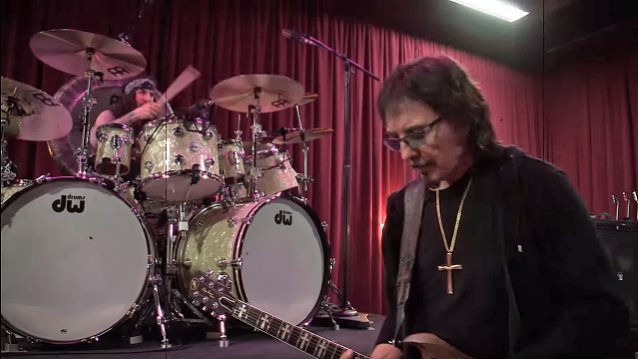 BLACK SABBATH has uploaded a short video clip featuring footage from the band's rehearsals for the upcoming "The End" tour. Sitting behind the kit during the sessions is Tommy Clufetos, who was also the drumer for the group's last world trek.

The full rehearsal clip will be released on Friday, January 15.

"The End" kicks off on January 20 in Omaha and will encompass about a year, including breaks.

Estranged BLACK SABBATH drummer Bill Ward once again insisted in a recent interview that he was quite capable of playing a full concert with the group, despite the bandmembers themselves saying the opposite. Ward stepped away from the SABBATH reunion in early 2012, while the group hinted that he was not in good enough physical shape to either record or tour.

Speaking with Rei Nishimoto of Ghost Cult magazine, Ward said: "I was never in a position where I was never able to drum. It's really sad that those statements made about me that inferred that I wasn't able to drum.

He reiterated: "Never at any time was my drumming impaired, my health impaired or my ability to play drums. I'm so angry about those suggestions and that was going on."

BLACK SABBATH singer Ozzy Osbourne told The Pulse Of Radio during the band's last tour that Ward was not in shape to participate. "Bill Ward has got the most physically demanding job of the lot of us, 'cause he's the timekeeper," he said. "I don't think personally he had the chops to pull it off, you know. The saddest thing is that he needed to own up to that, and we could have worked around it, whether we had a drummer on the side with him or something."