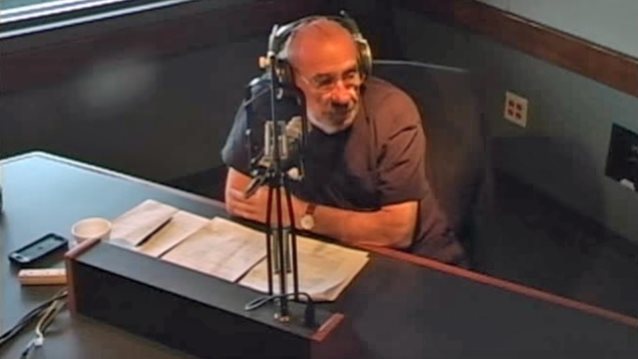 Estranged BLACK SABBATH drummer Bill Ward has commented on the passing of former MEGADETH drummer Nick Menza, saying that Nick had the "heart and soul" of some of rock's most influential players.

During this past weekend's edition of Ward's radio show "Rock 50", he said (see video below): "Sadly, again, we lost another drummer. The drummer's name was Nick Menza, probably more well known for playing in MEGADETH. Nick was born on July 23, 1964 in Munich, West Germany, and sadly he passed away on May 21, 2016, age 51. From what I can gather from the bio, he actually died, I believe, on stage. He had heart failure while performing with his band, OHM:, and that was in Los Angeles when he was performing.

Ward added: "I was looking at Nick's influences. I always like to do that. It gives you some idea of the substance of the man. And some of the people that he listened to, his influences, if you like, [were] Buddy Rich, Steve Gadd, Nick Ceroli, Jeff Porcaro and Louie Bellson. And… Well, all I can say is ditto, ditto, ditto, ditto, ditto. All those guys are incredibly great drummers. Influential, not only in the way that they swing and the way that they are as jazz musicians, but they also were good rock… There's obviously some rock musicians there as well. But they have that thing; they have that heart and soul. And I'm sure that Nick Menza had that too. I've heard him play on the album 'Rust In Peace'. I believe we actually played that… I think we played that back on 'Rock 50' at one point or another.

"At 'Rock 50', we try to always make it known that we send our sincere and saddest condolences to Nick Menza's family. Regrettably, he passed away, and we're very sorry to hear that. And we send our condolences."

Nick collapsed after suffering a heart attack after the third song of OHM:'s set at The Baked Potato in Studio City, California and was pronounced dead upon arrival at hospital. He was 51 years old.

The original lineup of SABBATH reunited in late 2011 for a new album called "13" and a world tour. Although Ward was on board at first, he dropped out over what he called contractual issues. Ward is not part of the band's 2016 farewell tour either.