The new maze, which opened this past Friday, September 20 at Universal Studios Hollywood's premier Halloween Horror Nights event, is based on the darkest lyrics from BLACK SABBATH's biggest hit songs and is the only attraction at the horror event to incorporate 3D video. It also includes scenes inspired by the legendary band's recently released Billboard #1 album, "13". A nightmarish landscape of doom engulfs guests as they enter "Black Sabbath: 13 3D" and traverse through horrifying graveyards, disturbing madhouses and bone-chilling battlefields.

"We were all really excited when Universal Studios Hollywood approached us about doing a 3D 'Halloween Horror Nights' maze based on our music," said BLACK SABBATH's Ozzy Osbourne. "I've seen the drawings of what it will look like when it's finished and it looks amazing. I can't wait to walk through it on opening night in September."

Guests come face to face with a heart-stopping Lucifer and his bride, blood-soaked dead bodies and bubbling pools of "radioactive water" while songs inspired by "Luke's Wall", "Iron Man", "Paranoid", "War Pigs", "Electric Funeral" and — of course — "Black Sabbath" violently penetrate the confines of the maze at high volume.

"Halloween Horror Nights" 2013 at Universal Studios Hollywood brings together the sickest minds in horror to immerse guests in the living, breathing, three-dimensional world of the most notorious and terrifying creatures and features a slate of unrivaled film production quality mazes, terror-filled Scare Zones and a fully re-imagined "Terror Tram" experience, uniquely themed to today's most definitive horror properties. This year's haunted attractions will include "The Walking Dead: No Safe Haven", based on AMC's Golden Globe-nominated, Emmy Award-winning show, and "Evil Dead: Book of the Dead", inspired by Sony Pictures Home Entertainment's chilling remake of the cult classic. 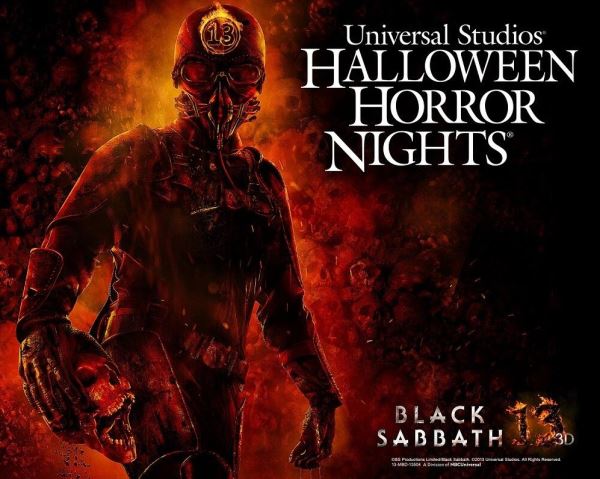