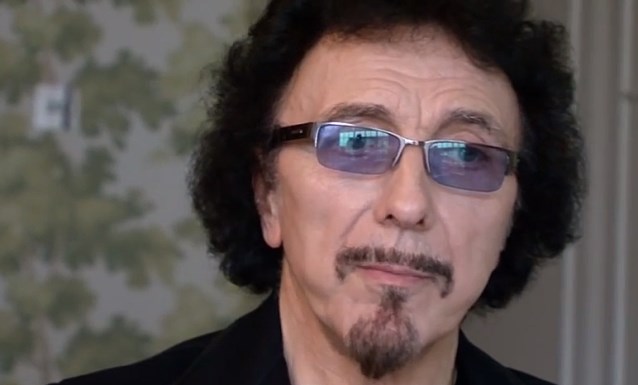 According to The Pulse Of Radio, BLACK SABBATH guitarist Tony Iommi has posted a message to fans at his official web site, hinting that his next round of treatments for cancer might be his last for a while. Iommi has had to go back to England every six weeks for treatment ever since being diagnosed with lymphoma in 2012, forcing him and SABBATH to work around both the treatments and the recovery time needed afterward.

Now he has written, "We've some good things lined up for the coming year, firstly the Grammys, then some dates in the U.S. and Canada, and in the summer a quick trip round Europe. I should also be finishing my regular treatment and I'm hoping to not get so tired — all positive."

Last year, Iommi said that his ongoing treatments and their physical side effects could severely restrict SABBATH's activities, explaining, "I can't commit to doing another two years or anything like that. I have to play it as it comes now."

But in his new message, Iommi sounded more upbeat, saying, "After such a brilliant 2013, it's going to be difficult to match it this year but we'll be having a go." He also thanked his bandmates, producer, management, record label, road crew and assistants for helping the band.

Singer Ozzy Osbourne told The Pulse Of Radio that Iommi never let his treatments slow him down during the making of the recent SABBATH album, "13". "My hat goes off to him 'cause he really is Iron Man," he said. "I mean, that chemotherapy knocks you sideways, you know. I mean, when my wife had cancer a few years back, she was having three chemo things a month and it would knock the life out of — literally every time she'd have a treatment, she'd have a seizure. It's scary stuff. But he came down, plugged in and carried on. He's my hero, I swear to God he is."

"13", the first SABBATH release in 35 years to feature Iommi, Osbourne and Geezer Butler playing together, was released last June and landed the band its first-ever No. 1 album in the U.S., also topping the chart in the U.K. and a number of other countries.

The band has also earned three 2014 Grammy Award nominations, for "Best Rock Album" for "13", plus "Best Metal Performance" and "Best Rock Song" for "God Is Dead?"

SABBATH will begin a 10-date North American run on March 31 in New York, ending in Los Angeles on April 26.