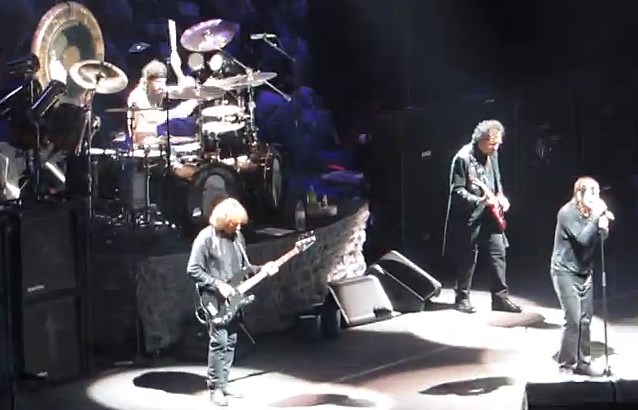 Fan-filmed video footage of BLACK SABBATH's August 14 performance at Air Canada Centre in Toronto, Ontario, Canada can be seen below.

BLACK SABBATH bassist Geezer Butler told the Chicago Sun-Times that the band's current tour in support of its long-awaited reunion album, "13", could very well be his last. Asked why he thought that, Butler explained, "I don't know. I just got a feeling. It's getting tough, it really is. I can't lie about that. I'm old now. It really is tough going on every night. You wake up the next day, all the pains you never had before. I don't want to go onstage for the sake of the money. You have to have a lot pride in yourself, and I honestly think I'm coming to the end of the top of my job."

Butler also said that he's enjoying the current SABBATH tour, adding, "I've always said as long as I can play, as long as I can do it to a good level, then I'll keep doing it, because I still really enjoy playing. I'll know when the day comes I can't do this anymore, can't play to my usual standards. That's when I won't go out anymore. I won't do that to me self. But at the moment, I just love playing with the band. It probably will be the last time, will probably be the last tour. But I want to go out on a high. The band is playing really well at the moment."

Butler, guitarist Tony Iommi and singer Ozzy Osbourne reunited in late 2011 to record their first new album together in 35 years. Original drummer Bill Ward was on board at first but dropped out over contract disputes.

Progress on the record was slowed first by Ward's departure and then by Iommi's January 2012 cancer diagnosis.

Ozzy told The Pulse Of Radio that the band members knew this might be their last chance to make an album together. "We knew as a band that people were gonna go, 'Oh yeah. they're going in the studio again, it's never gonna happen,' you know," he said. "So we just marched through all the problems and did an album, you know, with Rick Rubin."