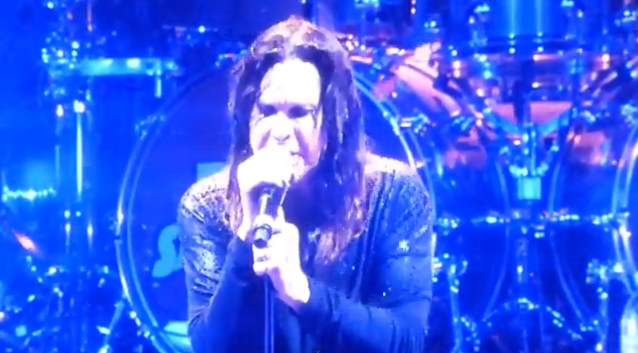 Fan-filmed video footage of BLACK SABBATH's April 26 concert at the Hollywood Bowl in Los Angeles, California can be seen below.

BLACK SABBATH members Tony Iommi (guitar), Geezer Butler (bass) and Ozzy Osbourne (vocals) were presented with platinum plaques by Universal in Montreal, Quebec on April 7 for Canadian sales of their 2013 comeback album, "13", (100,000 copies) and their live album and DVD/Blu-ray, "Live... Gathered In Their Masses" (10,000 copies).

BLACK SABBATH's recent North American tour consisted of a series of 10 shows encompassing mostly Canadian stops until winding down on April 26 in Los Angeles. According to a press release, these gigs were among the final shows that SABBATH has done in support of its current studio album, "13", which became the band's first No. 1 album ever in the U.S. when it was released in June 2013.

The group has been on the road since April 2013 in support of the record, which reunited Osbourne, Iommi and Butler for their first full-length studio project since 1978's "Never Say Die!"

A contract dispute led drummer Bill Ward to sit out the reunion, which was also marred by Iommi's cancer diagnosis in early 2012.

Iommi revealed in January of 2012 that he had been diagnosed with lymphoma, which is described by the Mayo Clinic as "a cancer of the lymphatic system, the body's disease-fighting network."

He described his "infusion" treatments to the Birmingham Mail earlier this year, explaining, "I have to have an antibody administered by drip every six weeks or so to keep the lymphoma in check. It sort of coats the cancer cells, stops it from going anywhere else. I have to come back home no matter where I might be in the world."

He added, "The tour dates are arranged so that I can always get back for treatment. It's the only way I can manage my illness and keep on the road. I'd love to play more shows . . . but my health has to be sorted out first."

The legendary guitarist said that his treatment is a relatively new process and doctors are not sure what all the side effects might be. He also said that it "takes around 10 days to fully recover from each round of treatment, but if that's what it takes, I have to accept it."