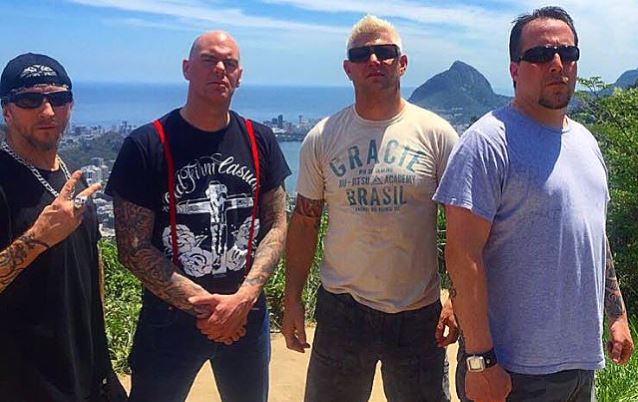 "The Metalist" conducted an interview with Billy Graziadei of hardcore/metal veterans BIOHAZARD prior to the band's July 9 concert in London, England. You can now listen to the chat using the SoundCloud widget below.

Asked when fans can expect the follow-up to 2012's "Reborn In Defiance" album, Billy said: "Early next year; that's the plan, yeah."

He continued: "It's not even like making wine. It's not like you can sit here and say, 'Oh…' 'Cause when you make wine or you make vodka, or whatever, alcohol, there's a finite end to the process. For us, it's, like, when it's ready, it's ready, and I think if we rushed… I'd rather have a kick-ass record that stands the test of time and that we can play live every night at a show that works rather than rushing an album just to get it out because everybody wants it. So when it's ready, it's ready. But we have a whole slew of songs that are kick-ass."

Graziadei also talked in more details about BIOHAZARD's musical approach on the next album. He said: "We focused, and are focusing, on having songs that we could play live. it was always… I love everything that we've done — no apologies, no regrets — but every record… Not solely being into punk or punk rock, which are huge influences, especially for myself. I started playing piano when I was six. Bobby [Hambel] is a phenomenal guitar and musician. We all have musical tastes that vary from songs that we play live, but the energy on stage with BIOHAZARD is what we love the most, and the songs on each record that we play live work well live, 'cause we like that energy; it's a big part of BIOHAZARD. But the musical side is another big part, but that stuff doesn't transcend so much into the live environment.'

He continued: "The new record, for the first time, [we all] kind of just said, 'You know what? We're all in agreement that we don't want a record that doesn't have anything but just full-on, in-your-face, live-style BIOHAZARD. It's all the songs that are just high energy, stuff that will work well live. It's, like, twelve 'Punishment's — that's what we're looking for… It's definitely along the lines of songs like 'Vengeance Is Mine' — more of the high-energy side of BIOHAZARD. I think we infuse our influences unintentionally, but it just comes out naturally. And it's a weird way of having this punk energy and looseness to the tightness of metal and thrash and hardcore."

Billy added: "It's funny, 'cause if I write something and I double the guitars, it doesn't sound like BIOHAZARD until the other guys put their parts into it. Then it has that kind of BIOHAZARD flavor. We've always called it the meatgrinder. It's kind of, like, you take all the elements, you throw them together and you mix it all up and it spits out this pink slop of BIOHAZARD. We're not the type of band that can surgically take apart our music. It's better when it's left raw and in your face."

BIOHAZARD last year inked a new worldwide deal with Nuclear Blast. The band was previously signed to Nuclear Blast for Europe only.

"Reborn In Defiance" was released in Europe on January 20, 2012 via Nuclear Blast.

Not only was "Reborn In Defiance" BIOHAZARD's first original lineup album in 18 years, it also marked the last LP recorded by the band before the departure of bassist and co-vocalist Evan Seinfeld. The effort remains a testament to the four founding members (Billy Graziadei, Bobby Hambel, Evan Seinfeld and Danny Schuler) and their unique chemistry.

Seinfeld left the band in June 2011 after the band's new CD was completed and was replaced by Scott Roberts, who played on the band's 2005 "Means To An End" album and has been part of the BIOHAZARD extended family since.