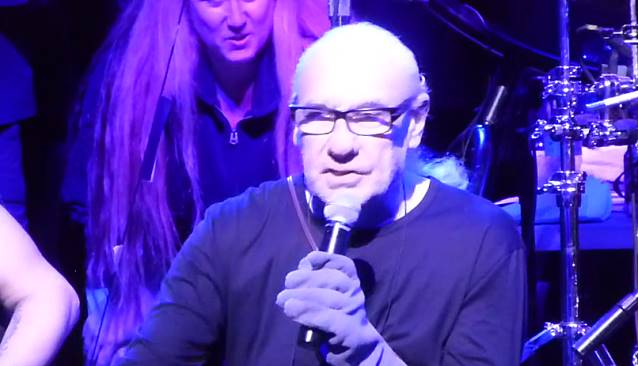 Legendary BLACK SABBATH drummer Bill Ward was presented with the "Lifetime Achievement" award at the Bonzo Bash NAMM Jamm 2014 "The Ultimate Celebration To The Ultimate Drummer - John Henry Bonham Of Led Zeppelin", which took place on Thursday, January 23 at The Observatory, in Santa Ana, California. You can watch video footage of his acceptance speech below.

Ward recently underwent surgery for perforated diverticulitis, a very serious gastrointestinal condition in which the walls of the intestine have become perforated. His operation was said to be successful, and he was expected to make a full recovery.

Ward revealed in an interview with Rock Cellar that he tried to listen to last year's SABBATH reunion album, "13", but had to stop after just a few minutes. Ward said, "The only thing I've heard from '13' is maybe 40 seconds of the first song, and then I turned it off. I haven't heard anything off that album at all. And to be quite honest, I don't care to either. It's too painful. If I want to rip my guts out, I'll put it on."

Ward, the group's founding drummer, has played on and off with SABBATH over the years and had initially signed on for the original lineup's first album in 35 years and accompanying tour, announced in late 2011.

But he quit shortly before the writing and recording of the disc began, saying he was dissatisfied with the terms of the contract he had been offered.

Although he never specified what his issues were, the other members of SABBATH later hinted that Ward was not physically up to the task of performing live.

SABBATH used RAGE AGAINST THE MACHINE drummer Brad Wilk for the recording of "13", while Tommy Clufetos has been the live drummer.

Ward added that he remains "deeply touched" by the outpouring of support that many fans have shown him, saying, "It tears me up, you know. Even as I'm talking to you now, I'm not far away from a tear. I had to follow my heart under the most difficult circumstances."

SABBATH has been touring for much of the past year behind "13" and has dates lined up in North America in March and April.