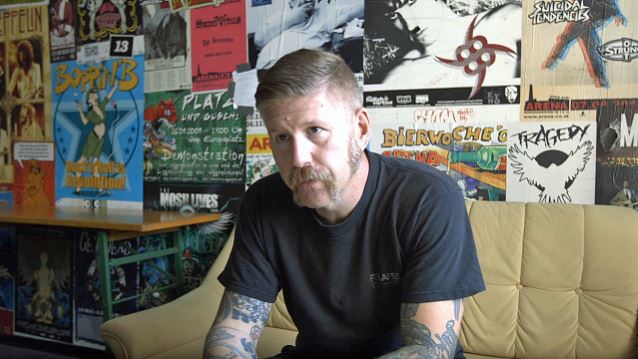 GuitarMania conducted an interview with guitarist Bill Kelliher of Atlanta progressive metallers MASTODON before the band's August 24 concert in Vienna, Austria. You can now watch the chat below.

Asked about the progress of the songwriting sessions for MASTODON's follow-up to 2014's "Once More 'Round The Sun" album, Bill said: "I've already come up with eleven songs, which is probably about an hour's worth of music — like, finished, start to end. It'll change as everybody chimes in and takes the things I wrote and maybe changes them a little bit, or we might take parts out and write a new part."

He continued: "Honestly, I was very busy the past few months writing. 'Cause I have a studio at home, so I can just sit down there and listen to a click track and record all my ideas that I've come up with on the road. 'Cause I don't have the time to write when I'm at home — I'm very busy at home with my family and my kids. I can't just sit there and go like this [plays air guitar] all day. That's what these days [on tour] are for."

Bill added: "It's seventy percent there. It just needs everyone to play on it."

Regarding what fans can expect to hear on MASTODON's next album, Bill said: "It's a little bit of the same as the last album, but I think it goes even deeper in certain areas — a couple of more psychedelic parts, a little more technical parts. There are a couple of new places we haven't gone before. So it's just kind of a continuation of the last record to me, but even deeper."

Kelliher also talked in more detail about the MASTODON songwriting process. He said: "[Brann Dailor, drums] and I will write six, seven, eight, nine, ten, eleven songs, and then Brent [Hinds, vocals/guitar] and Troy [Sanders, vocals/bass]… Like, Brent will write a few songs, and then we'll all try to come together and make it make sense."

MASTODON is tentatively due to enter the studio in October to begin recording the new CD for an early 2017 release.