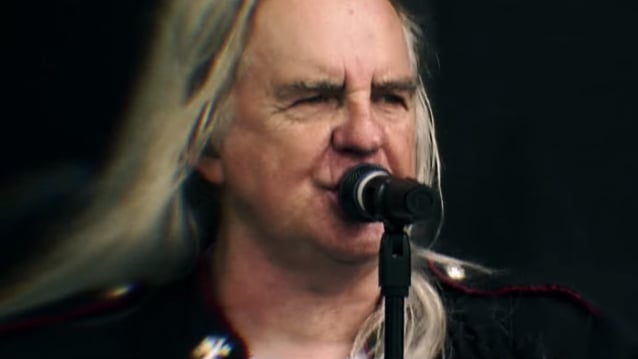 Although SAXON is widely recognized as one of New Wave Of British Heavy Metal's pioneering exponents, the band has failed to mirror its European success in the U.S. Along the way, musicians joined and left (sometimes acrimoniously) and a brief shift towards a more commercial major label sound alienated older fans.

Speaking in Issue 15 of Planet Rock magazine, Byford was asked why SAXON didn't hit it big in America in metal's heyday in the 1980s.

The singer replied: "We could have broken really big. We did well, but we didn't make the breakthrough that DEF LEPPARD or IRON MAIDEN did. There was always some mess-up with the records, and there were forces at work that weren't exactly helpful. We didn't have a great team around us at that point, and it was a very money-orientated time as opposed to a music or career-orientated time. Unlike MAIDEN and LEPPARD, we had no [manager like] Rod Smallwood or Peter Mensch behind us to kick us up the arse when we needed it."

In a 2016 interview with the Irish Examiner, Byford addressed the myth that SAXON ran aground when trying to break America by repositioning itself as a glam metal group (going so far as to take MÖTLEY CRÜE on tour with them). "I don't know if that's true," he said. "We had a couple of big articles in the British press [about failing to break the U.S.]. They never said that about MAIDEN. To tell you the truth, it's a bit unfounded."

Byford and guitarist Paul Quinn are the sole remaining original members in the group's current lineup, which issued its 22nd LP, "Thunderbolt", in February 2018.