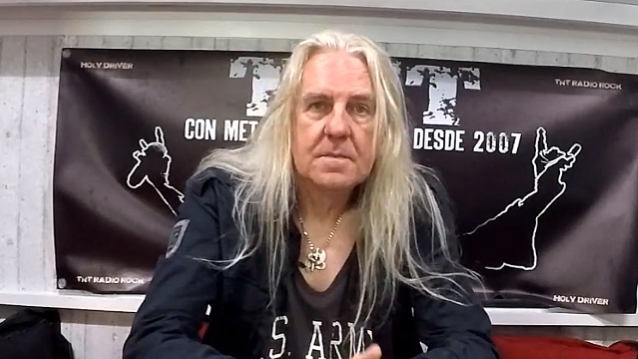 SAXON frontman Biff Byford has told Spain's TNT Radio Rock that he is pleased with the response to the band's latest album, "Thunderbolt". "The record is still selling good — really good," he said (see video below). "We have a new version coming out in September with some live tracks on there. So, yeah, it's selling really well. It's probably our biggest-selling album since 'Solid Ball Of Rock', which was 1990, I think. [Editor's note: It was actually 1991.] The timing is good at the moment for SAXON and [IRON] MAIDEN and JUDAS PRIEST — very good for British bands of the '80s. So, yeah, it's good. We're riding a good wave of good feeling, so it's good."

Asked about the songwriting process for "Thunderbolt", Byford said: "We're not like a lot of bands. We don't write albums; we write songs. And then when we've written the songs, we put an album together. So there's no concept behind on the album.

"I had the idea of 'Thunderbolt' quite a while ago, and we just pieced it all together.

"For us, the songwriting is very important — every song has to be great, the lyrics have to be good, the choruses have to be big. So that's how we do it. I worked with [producer] Andy Sneap quite closely, and me and him put most of it together in the studio."

The tour edition of "Thunderbolt" will be released on September 7. The set features live recordings of "Thunderbolt" and "Nosferatu (The Vampire's Waltz)" recorded in Frankfurt and Los Angeles on the 2018 "Thunderbolt" world tour. The CD format also contains a 10" x 10" poster with photos of the band while on tour.

"Thunderbolt" was released in February via Militia Guard (Silver Lining Music). The follow-up to 2015's "Battering Ram" was once again helmed by Sneap, who has previously worked with JUDAS PRIEST, MEGADETH, ACCEPT and TESTAMENT, among others. The disc features original artwork by longtime SAXON collaborator Paul Raymond Gregory.