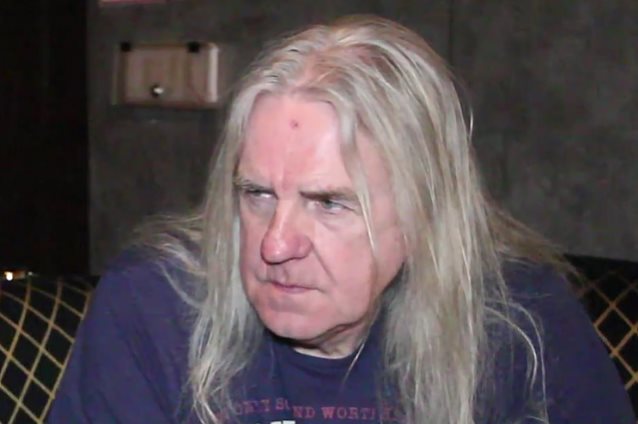 The Jimmy Cabbs 5150 Interview Series conducted an interview with SAXON frontman Biff Byford prior to the band's March 16 show at the Belasco Theater in Los Angeles, California where they were the support act for UFO. You can watch the full chat below. A few excerpts follow (transcribed by BLABBERMOUTH.NET).

Biff: "It's a bit like what [late MOTÖRHEAD frontman] Lemmy [Kilmister] said: 'We can't do anything else.' The thing about SAXON, we're always trying to be on the edge, the edge of fitness, the edge of songwriting, so we're pretty much out there, really. We do manage to keep the energy up; I don't know why really. We're just in good shape, I suppose."

On how the band maintains the quality of their live performances:

Biff: "We try to put a lot of energy into the show. When we're writing songs now, we're trying to write songs that are exciting to listen to. I think that's the key. You can never bring back the '80s; it's impossible. You can't bring back the '70s either. You can still try and keep that edge, that sort of…just not too laid-back. Our music is '80s music and it has always been a bit edgy."

On how SAXON has avoided being repetitious:

Biff: "I think we went through a period in the late '80s where we were changing slightly our recordings, our writing style a bit. But, I think we just turned around on ourselves and thought 'What made us big in the first place? Why did people like us in 1980?' [We] turned that around again and tried to write songs that are interesting, lyrically, that are on the edge playing-wise for the guys on the guitars. It's just a matter of finding something that we love and then be excited about it and then throw it out there and hopefully have fun as we go along with it."

On whether SAXON is writing new material:

Biff: "Yeah, we've finished seven songs. We've recorded seven songs with [producer] Andy Sneap, the same guy who did the last one. He's gone off with JUDAS PRIEST now. He's going to be back again in September with us. We should have it all finished by summer. Hopefully a new album out in 2018. It should be good."

On the band's current United States tour with UFO:

Biff: "It's great, really. It's a good package. We love UFO and loved UFO for years. UFO are basically a '70s band and we're an '80s band so the two styles fit together really well. If you listen to UFO, you listen to us. It's where we started from that period."

On whether playing with UFO brings out the best in SAXON:

Biff: "Yeah, I think it does. Obviously, we don't have too long to play like we when we're headlining or closing the show. You have to compact it all in the period you have. We're playing for an hour and ten minutes, which is not bad. Our usual show is an hour forty-five, two hours, so you have to compact it in and I can't talk too much to the audience. [Laughs] It keeps us on the edge, I'm telling you. To go out in the middle, it's a nice spot to be in, in the middle of the show. It's great because everything is rushy-rushy. [You're] onstage, offstage. It just keeps you on your toes, really."

On whether the fact SAXON has been around for more than three decades surprises him:

Biff: "It's been a long time ago, yeah. It's a while. Actually, 36 years ago, our first album came out. We've been through it all. Our motto is 'Never surrender.'"

SAXON recently revealed that the band's forthcoming follow-up to 2015's "Battering Ram" will include a song dedicated to MOTÖRHEAD, called "They Played Rock And Roll".