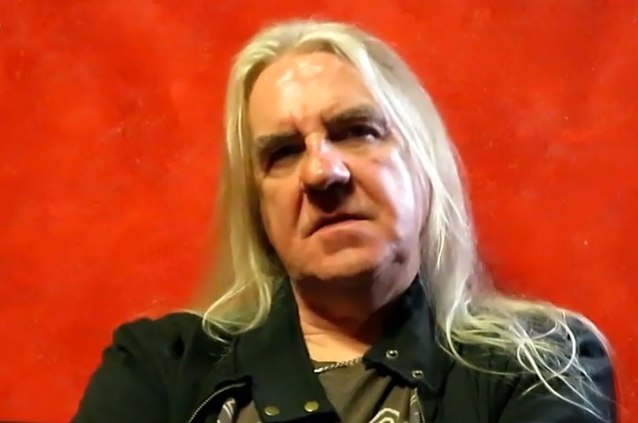 SAXON frontman Biff Byford was recently interviewed by Italy's Metalforce. You can now watch the chat below.

Speaking about the decline in digital music sales as the music business inches closer to an access-over-ownership model, Biff said: "My son's in a band, and they're streaming their new EP. So I think it's good for young bands to do that. I think we have to have both — we have to have a physical CD and streaming; the best of both. We do a million streams on [SAXON's latest album] 'Thunderbolt'. Compared to some bands, that's nothing. Some bands have 25, 30, 40 million streaming. A lot of people buy the physical product with SAXON, as they do with [IRON] MAIDEN and JUDAS PRIEST, and they did with MOTÖRHEAD. So people like the CD — especially the vinyl, people love the vinyl."

SAXON will celebrate its 40th anniversary in 2019 with what they promise will be the band's "largest, loudest, brightest, most explosive show ever!" The trek — the details of which will be announced soon — will see the group accompanied by 60 tons of light and sound, and 45,000 watts of power.

Last year, Byford told Moshpit Passion that the 40th-anniversary run would include "some festivals and maybe two or three special shows."