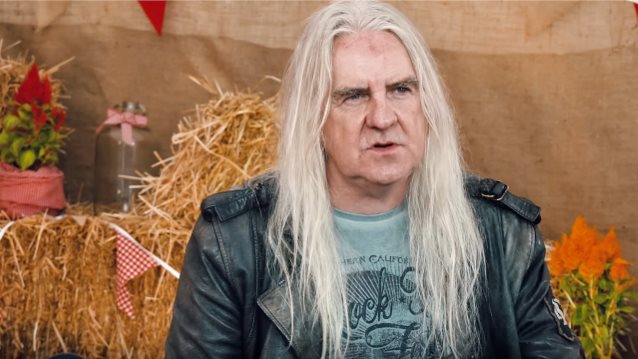 Kylie Olsson of uDiscover Music conducted an interview with vocalist Biff Byford of British metal legends SAXON at Ramblin' Man Fair, which was held July 29-30 at Mote Park in Maidstone, Kent, United Kingdom. You can watch the full chat below. A few excerpts follow (transcribed by BLABBERMOUTH.NET).

On SAXON's 1980 appearance at the Monsters Of Rock festival, which was held at Castle Donington Raceway in Derbyshire, United Kingdom, and the importance of playing such big events:

Biff: "It's important because you get to play in front of a lot of different fans who are not all your fans, especially if you're first starting. It's good to steal the people's fans, that's what it's all about. It's still the same today. We went on and just went for it. We were quite big when we went on. We sold 100,000 records when we went onstage. We were the underdogs; I don't think any of the other bands ever heard of us, maybe JUDAS PRIEST. Yeah, it was great. It was one of the first shows of the '80s, the big festivals of the '80s."

On which band playing the Ramblin' Man Fair he'd like to be a part of:

Biff: "I'd like to be the guitarist in ZZ TOP. That would be great. It would sound bloody awful, but I reckon I could do it. I could put on a false beard. I know a few Billy Gibbons licks anyway."

On whether he thought SAXON were onto something special as part of the New Wave Of British Heavy Metal (NWOBHM) scene:

On whether SAXON had a connection with the AOR (Album Oriented Rock) scene that was popular in the '70s:

Biff: "Not really, no. I'm the melodic one. The other guys are the guitar boys and [are into] riff things. It's a fine balance. If you got too melodic, you sort of wimp out a bit. If you got too heavy, you're into the sort of other bands' territory, like METALLICA. You have to stay somewhere in between because we were starting in the '80s and the songs are heavy, but they're quite melodic. The early albums were a mixture of heavy metal and sort of, rock. We tried to stay the same now as we were in the '80s, because I think we veered away in the late '80s and turned a little bit more melodic, but I blame the guitarists for not writing the riffs. [Laughs]"

On how he feels when a band like METALLICA cites SAXON as an influence:

On touring with MOTÖRHEAD in the early '80s:

Biff: "It was fantastic. We became friends and stayed friends for forever, really."

On his first impressions of MOTÖRHEAD frontman Lemmy Kilmister:

Biff: "Stunning sense of humor, Lemmy. Me and Lemmy got along really well. We had the same sort of wit, very dry and slicing. [Laughs] I do miss him. I do miss Lemmy. We used to chat a bit on texting and things. Yeah, I do miss him."