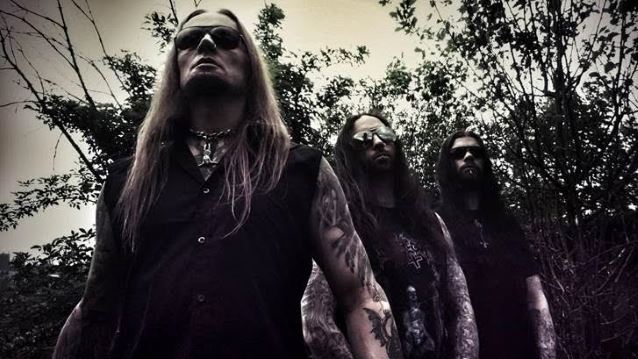 Austrian extreme metallers BELPHEGOR are hard at work in Abtenau, Salzburg on new material for their currently untitled brand new studio album — the follow-up to "Conjuring The Dead". The new CD will be released in April 2017 via Nuclear Blast.

"It's important to me that we get better, tighter, raise the dynamics, and have each musician develop his skills with his instruments to bring our sound to the next level. We've always done our own thing and continue to do so.

"The new, currently untitled album will be our most obscure and brutal one. It's the first time we've tuned our guitars to H5 and ‪#‎A6, which is really low, and will add a new touch to our sound.

"We're forever on fire and ready for new challenges. Progress is experimentation and improvement. An honor — this horror."

A clip of BELPHEGOR playing a new song called "Totenkult - Exegesis Of Deterioration" live inside their "rehearsal bunker" can be seen below.