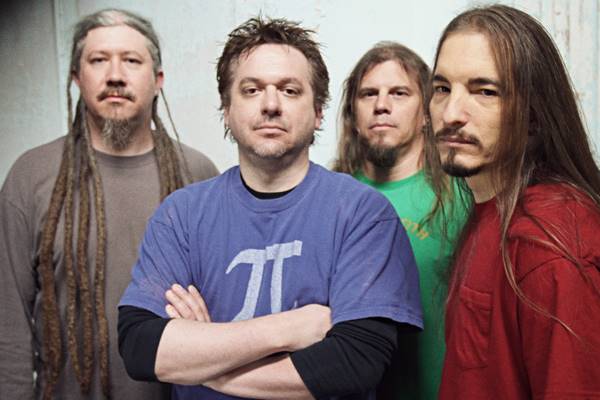 "The last couple years have been difficult for BELIEVER. Since early 2013 we've probably met together as a band in the hospital as much as anywhere else.

"I suffered from a very aggressive case of ulcerative colitis, an autoimmune disease that attacks the the large intestines. It didn't respond well to drug therapies, including the heavy-duty chemo-type drugs. At its worst, I was having diarrhea over 30 times a day with accidents everywhere — at home, at my studio, in the car. I was severely fatigued, malnourished and dehydrated, suffered from a lot of pain, and required frequent hospitalization. In the end, I had to have two major surgeries to remove my entire lower GI tract. Ulcerative colitis and the closely related Crohn's Disease are severely debilitating illnesses and I feel fortunate to be alive.

"The other band members have been extremely supportive throughout my health crisis, and Kurt [Bachman, guitar/vocals] especially has been instrumental in helping me through this process. It helps to have medical expertise on call when facing one potentially life-altering decision after another.

"Now that I am in full recovery mode, we've been able to turn our attention back to the recording project. That will be the focus of our next update.

Bachman previously stated about the writing process for the fifth BELIEVER album: "I feel that this will be the most sensual of all BELIEVER releases. Once again we are striving to create something unique while not throwing away any riff just because it might not fit the typical BELIEVER mold. This is part of the process we love and hate. We love being creative, yet we place intense pressure on ourselves to write something we'll enjoy hearing and playing at least 2060 times. Of course, we are sticking to our two main goals: 1) Have fun and 2) Don't die in the process."

BELIEVER's last album, "Transhuman", was released in April 2011 via Metal Blade Records. The CD was produced by Trauma Team Productions and was mixed by Kevin Gutierrez (RAVEN, PROJECT: FAILING FLESH, DECEASED, DYSRYTHMIA, GARDEN OF SHADOWS) at Assembly Line Studios in Virginia. The mastering duties were handled by Maor Appelbaum of Maor Appelbaum Mastering in Los Angeles.