"BEHERIT is back to destroy art," the band's frontman Nuclear Holocaust Vengeance told Anus.com in a recent interview. "I had very intensive two months, by writing new songs and re-creating the spirit of the BEHERIT sound. I think it turned out to be quite okay, kind of a mixture of all previous releases."

He added, "I wrote and composed the album by myself. I recorded a demo version in my home studio with tablatures and a few written notes about what kind of spirit I was looking for in that song. Then we went to the rehearsal room and for the next week I made some small changes in song structure that made it easier and more natural to play live. Rehearsal period was about three months. We had 60 minutes of raw material when entering the studio. Couple of tracks we didn't have time to finish."

Founded in 1989, BEHERIT helped create the second wave of black metal that emerged from Scandinavia in the early 1990s and re-defined what it was to be a heavy metal band. Louder, faster, darker and more contemplative, this music terrified onlookers and delighted fans.

Check out an audio sample at www.beherit.fi. 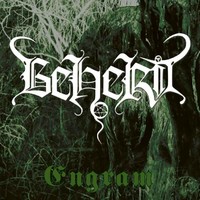