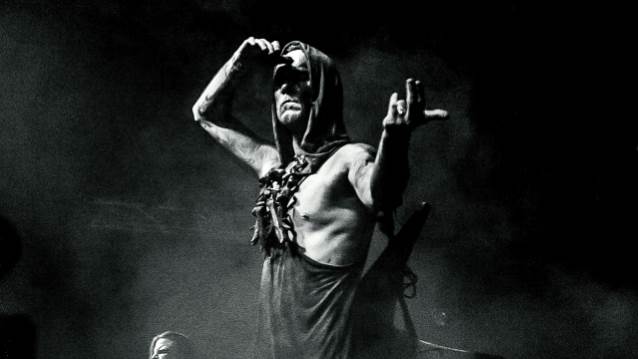 BEHEMOTH frontman Adam "Nergal" Darski spoke to Full Metal Jackie's nationally syndicated radio show about the band's long-awaited follow-up to 2014's "The Satanist" album, tentatively due before the end of the year. The new disc was mixed by Matt Hyde, who has previously worked with SLAYER and HATEBREED, among others.

Asked what BEHEMOTH's "main focus" was with the sound and the direction of the upcoming album, Nergal said (hear audio below): "Again, to capture the true spirit and nature of the band. And as much as we were happy with 'The Satanist', because we are still super happy with that album… But, then again, obviously, we are the last band on earth to repeat ourselves. This is the first place. If you put any record next to each other, every one is different; there's a lot of diversity. And, obviously, 'The Satanist' was recorded four years ago. We've been living our lives; we've been going through different periods; and we have changed again. So it's different music; it's a different endeavor. But what we captured this time is maybe an even more organic sound yet still very striking and very aggressive."

He continued: "Yeah, it's gonna be a different record, a different approach. I don't wanna talk much about it, because we've gotta stay kind of confident about it and just keep it to ouselves. But the whole structure of the album, the way it's built, it's one of a kind and it's something that we've never done before. So it's new grounds and it starts with the album title and everything behind it. You will be, like, 'Okay, what the fuck is going on here?' So it still does surprise me; it still feels very refreshing and very new — yeah, very refreshing. Yeah, I'm very excited. And I wish I could tell more about the new record, but the moment will come that we'll open Pandora's Box and then the world will see."

BEHEMOTH debuted a brand new song, apparently titled "Wolves Ov Siberia", during their May 5 appearance at the Pulp Summer Slam festival in the Philippines.

Back in January, Nergal stated about what fans can expect from the band's next disc: "[2009's] 'Evangelion' was the most perfectly recorded and perfect sounding record, but then 'The Satanist' was something else. The new one is going to be something else once again, I'm sure about it. So when people tell me, 'You need to top 'The Satanist''… I don't need to top anything. I just want to make sure we take curves with our career. We're gonna take a different direction in order not to get stuck in the same pattern."

BEHEMOTH is supporting SLAYER on the first leg of the latter outfit's last-ever North American run of dates. Also appearing on the bill are LAMB OF GOD, TESTAMENT and ANTHRAX.

BEHEMOTH's latest release was the live DVD/Blu-ray "Messe Noire". The set includes the band's victorious shows in Warsaw, Poland on October 8, 2016 and Brutal Assault 2016, as well as "The Satanist" cinematic archive featuring all official videos associated with the band's globally successful record of the same name.