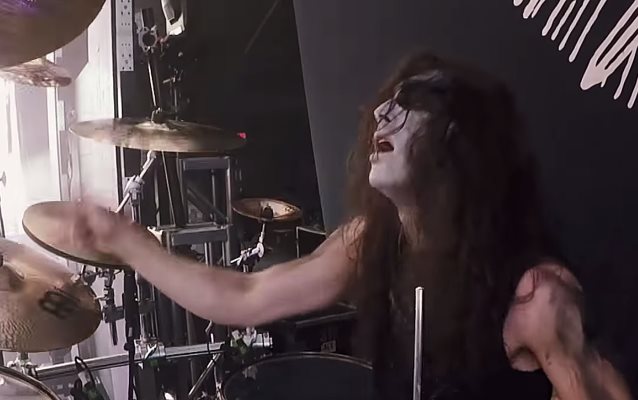 Drum-cam footage of former JOB FOR A COWBOY and SCORPION CHILD drummer Jon Rice sitting behind the kit with Polish extreme metallers BEHEMOTH at their July 25 concert at Blue Hills Bank Pavilion in Boston, Massachusetts can be seen below.

Earlier in the summer, Inferno stated about his absence from the trek: "I am going to be a father for the second time in my life and it's going to happen in July of 2017. I therefore must apologize to all our fans for not being able to participate in the 2017 summer North American tour. I believe that Jon Rice, an amazing drummer, a truly experienced musician, and a good friend of ours, will flawlessly take over my drum throne for this short period and will set the stage on fire!"

The six-week SLAYER, LAMB OF GOD and BEHEMOTH expedition kicked off on July 12 in Bemidji, Minnesota, and concluded on August 20 in Phoenix, Arizona.